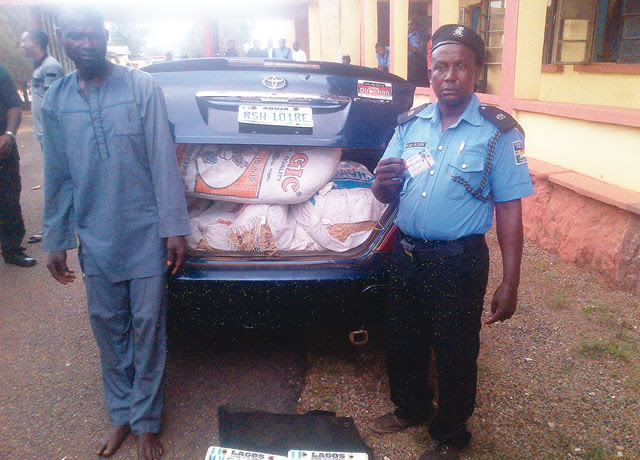 The Ogun State Police Command has arrested a fake Superintendent of Police, George Oliseh, with 10 bags of weed suspected to be cannabis.
The suspect, who wore police uniform and had an identity card which bore the rank, was reportedly arrested on Sunday at Sagamu, Ogun State, while bringing the bags of hemp from Owo, Ondo State, in his Toyota Camry car with number plate, RSH 101 RE.


He was arrested alongside one Isaac Ishicheli, who claimed to be his brother-in-law.
The Ogun State Commissioner of Police, Abdulmajid Ali, on Wednesday at the command’s headquarters at Eleweran, Abeokuta, paraded Oliseh  along with 37 suspected armed robbers, cultists, murderers, and a fraudster
Sixty-four-year-old Oliseh said it was poverty and frustration that forced him into the illicit business, adding that he had to take care of 23 children and five wives.
He explained that he was a policeman, adding that after he was dismissed from the force, he suffered partial stroke on the left hand and leg.
He said he became a commercial driver plying Idanre and Akure. He stated that he met a hemp dealer, named Inspector Umukoro, now late, who introduced the illicit business to him.
“It was Inspector Umukoro, an Urhobo man from Delta, who introduced the business to me, and I embraced it. I was a former corporal in the police. I joined the force in 2002, but I was dismissed in 2009.
“It was frustration and poverty that forced me into the business, because I have to take care of 23 children and five wives, though two had left.”
Also paraded was a 49-year-old suspected fraudster, Adenike Longe, who allegedly defrauded three companies of goods worth  N100m, issuing them dud cheques.
Ali said the command received a petition from one of the affected companies that the suspect  allegedly collected  bags of rice worth over N42m and issued a dud cheque, before absconding to Ondo State, where she was arrested.
But the suspect denied being a fraudster, saying she collected goods worth N40m and she had paid N4m out of the total sum.
Six suspected robbers, including three teenagers, were also paraded for alleged armed robbery at J4, Ogbere, in the Ijebu East Local Government Area of Ogun State.
An alleged 40-year-old serial killer, simply called Lucky, was also paraded along with five members of his gang.
The police boss said Lucky had been involved in series of murder in Lagos, and had fled to Ifo,  Ogun State, where he was arrested.
In the same vein, members of different cults, arrested at Ago Iwoye and Ijebu Igbo, were equally paraded.
Forty-one-year-old Sunday Ekanem, who was arrested in front of Redemption Camp, along the Lagos-Ibadan Expressway donning police uniform, was paraded for extortion.
The CP said the suspects would be made to face the consequences of their actions.
- April 28, 2016