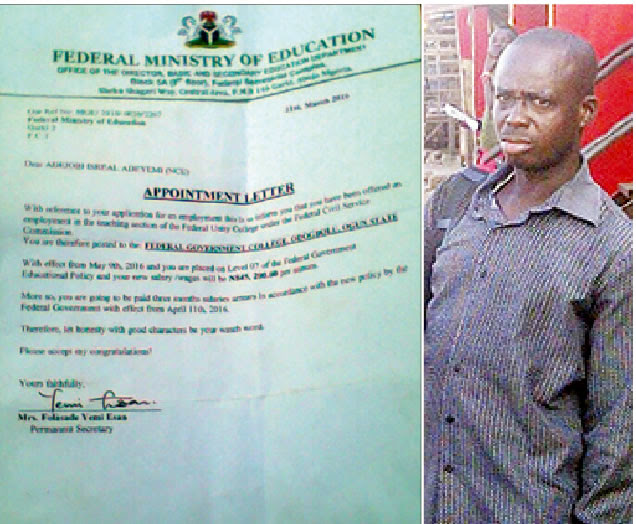 No fewer than 21 job seekers have fallen victims to a fake official of the Federal Ministry of Education, Abayomi Owoyale, after giving him money to secure teaching jobs.
Owoyale, who is currently in detention at the State Department of Criminal Investigation, Yaba, Lagos State, was said to have sold each of the letters, purportedly signed by the permanent secretary of the ministry, for N60,000.


While some paid in cash, others reportedly paid into a Zenith Bank account number 2170004060, bearing Fajemisin Olakunle Owoyale.
PUNCH Metro learnt that the suspect made first contact with his unsuspecting victims in the Agbado area of Ogun State on March 15, 2016, claiming that a politician in Abuja had given him 50 appointment letters to sell to those interested in teaching at federal secondary schools.
It was gathered that two parents bought the forged appointment letters for their unemployed four children, who are university graduates, Nigeria College of Education and National Diploma holders, while other youths with the same qualifications paid to Owoyale directly for ‘jobs’.
In the appointment letter, it was stated that the candidates would resume work on May 9 on an annual salary of N845,200.
“You are therefore posted to the Federal Government College, Odogbolu, Ogun State, with effect from May 9, 2016, and you are placed on level 07 of the Federal Government Educational Policy and your new salary will be N845,200 per annum,” one of the letters partly read.
Our correspondent gathered that the beneficiaries became suspicious when Owoyale started sending to them controversial text messages.
In one of the messages shown to PUNCH Metro, Owoyale had requested the prospective ‘employees’ to visit the schools they were posted to between April 4 and 15.
But he later sent another text message which read, “Last Notice: This is to inform all the candidates to please hold on and not to report to the school principals yet until you are told to do so. The master list has not been forwarded to some schools. Please, you shall be contacted shortly on when to do so. Thanks.”
A parent, Mrs. E.O. Oluborode, said she paid N360,000 to Owoyale for the appointment letters she bought for her two children, her in-law and three others, adding that the inconsistencies of the suspect’s messages made her to involve the police in the matter.
She said, “I bought the appointment letters for my two graduate children, my daughter’s husband and helped my brother’s wife, my son’s friend and a friend’s son to buy one each. I paid him N360,000 altogether. About 15 others also showed interest in the appointment letters and had given him part payments.
“After closely observing the messages he sent to me, it occurred to me that I must have been defrauded. I alerted the police yesterday (Tuesday) and called him on the phone to come down to Kola bus stop to collect N190,000 balance of those that had not fully paid.  He was arrested at the bus stop and taken to Panti.”
Another victim, Adejobi Adeyemi, said he resigned from a private secondary school in Abeokuta, after he received the letter, thinking that he had secured a better job.
He said, “I am an NCE holder. It was a church member, Damilola, who introduced me to the man. I paid him N15,000 cash on March 15 and paid another N10,000 a week after into his Zenith Bank account. On April 1, I paid N5,000 to make it N30,000. After he gave me the appointment letter, I resigned from the school where I was teaching. I want my money refunded.”
A man, who identified himself only as Ade, said he suspected foul play because the letter did not carry government stamp, adding that his wife, who needed a job, persuaded him to pay the money.
Mrs. Comfort Adeyanju, a trader, said Owoyale collected N415,000 from her to get 11 letters for her two children, her relatives’ wards, and friends’ children.
She said, “I coordinated the payment on behalf of 13 persons. Some made part payments of N40,000 while others paid in full. He was releasing the letters in trenches as our payment progressed. He had given us 11 before he was arrested. We want our money back and appeal to the government to assist us in getting jobs for our children so that we won’t fall victims again.”
The Lagos State Police Public Relations Officer, SP Dolapo Badmos, confirmed the fraud, saying, “The Commissioner of Police, Fatai Owoseni, ordered the transfer of the suspect to the SDCI for discreet investigation.”
- April 28, 2016