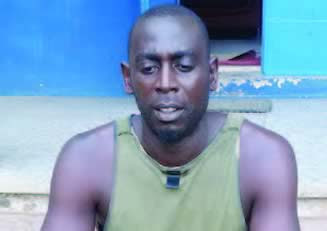 A suspected burglar, Samson Ugbusun, has revealed how the daughter of his victim gave him up to the police after he made love overtures to her.
Ugbusun, a 28-year-old bricklayer, was arrested by operatives of the Edo State Police Command for allegedly breaking into the home of an unsuspecting resident at Etete, in Oredo Local Government Area of the state, carting away two mobile phones.
It was gathered that after he successfully carried out the operation, the suspect went ahead to invite his victim’s daughter to spend a night with him in his apartment.
According to him, he was later arrested by some policemen from the Etete Police Division after she leaked his whereabouts to her mother.
Ughusun, who hails from Ikpoba Okha Local Government Area of the state, said, “I stole handsets at Etete, through the window around 11pm. I removed the handset through the window of the house by tearing the net. This is my first time.
“I saw her (victim’s daughter) number on the phone I stole. I called the girl and told her that I love her. She came and spent a night with me and went back to school. When she came to my place, she told her mother my address and everything; that was how they got me.”
He also blamed his alleged crime on family problem, adding that he stole mobile phones to enable him to generate the sum of N800,000 for his late father’s burial.
“It was due to family problems. My father has a house and my family (members) are trying to push me so that I would leave the house for them. They said that if I don’t bury my father, I can’t claim ownership of the house.
“I wanted to sell the phones on the streets. But unfortunately, they caught me and I returned the phones back to the owners. I regret it,” Ugbusun lamented.
However, the State Police Public Relations Officer, Mr. Osifo Abiodun, who confirmed the suspect’s arrest, said Ugbusun would soon be charged to court as a prima facie case of burglary and stealing had been preferred against him.
Abiodun said, “Samson Ugbusun specialises in stealing from unsuspecting victims. He can steal handsets as if he had some powers to do so. Luck ran against him when he opened the window of the complainant at night.
“Constructively, he broke in and pulled the handset with a long stick, picked it from the window. The occupant raised an alarm and he was subsequently arrested. He has confessed to the crime, including other crimes he committed before.
“Very soon, he will be arraigned in court because a prima facie case of burglary and stealing is established against him; he will not go unpunished,” the police spokesman added.
- April 30, 2016