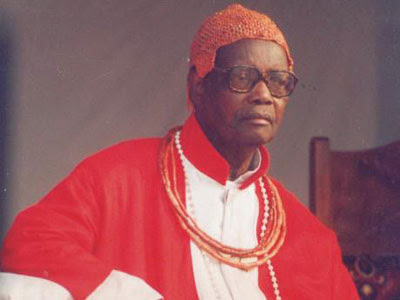 The Oba of Benin, Omo n’Oba Erediauwa Akpolokpolo I, is dead.
His death was announced few minutes ago by the Iyase of Benin Kingdom, Chief Sam Igbe.
The late monarch has been battling an unknown illness since last year.


The Benin Traditional Council‎ has announced the translation of the Oba of Benin, Omo N’Oba n’Edo, Uku Akpolokpolo, Oba Erediauwa, to his ancestors.
The announcement was made Friday by the Prime Minister and Iyase of Benin Kingdom, Chief Sam Igbe, in company of other traditional Chiefs and Enigie (Dukes), with the traditional braking of native chalk at the entrance of the palace.
While announcing the translation, the Iyase‎ said: “Osorhue Bunrun. Oba Erediauwa of Benin Kingdom, the Prince if Peace, Ebo, Ayemwirhe, emini mini mini, has returned with his ancestors. May he find perfect peace with God.”
Following the breaking of the native chalk at the main entrance of the palace, all the chiefs and enigie broke doen in tears and wail for the translated monarch.
In accordance with the Benin traditional mourning rites for a translated Monarch, every male in the kingdom is expected to shave his head throughout the mourning period that may last for up to three months, while all markets in the kingdom are to remain closed for about seven days.
The Benin Crown Prince and Edaiken of Benin, Eheneden Erediauwa, who arrived at the palace at about 1:10n from his Uselu resistance, was formally informed of the translation of his father, before it was publicly announced.
The late Monarch was crowned Oba of Benin in March, 1979.
Reacting to the announcement of the translation of the Monarch, the Obadolagbonyi of Benin Kingdom, Chief Omon-Osagie Utetenegiabi,‎ said:
“Yes, it is traditional. It is customary that when a sitting Oba becomes an ancestor, translates to a greater glory. T‎he Oba of Benin does not die because he is an institution; he mainly translates to a high glory as an ancestor.
“The news is first broken to his eldest son and the immediate family which was done earlier today. And the Iyase of Benin, as the highest ranking Chief now breaks the news to the people of Benin Kingdom and the world. Iyase is the traditional Prime Minister and the bridge between the people and the royalty and that is what he has done today.
“From today until the expiration of ‘Emwinekhua’ all Benin Chiefs, all chiefs that have been entitled by the Oba to wear the round bead round their necks, which is two, will now wear one. It is customary because when you see a Chief wears one bead, it shows that we are in a state of mourning. After today, we are awaiting further instructions on what to do.
“Oba Eredia uwa is the Oba of Peace, the Oba who brought prosperity to his people, the Oba who understands his people. He makes sure that no one was offended, the Oba who could sit in judgment and give judgment against his own son for a commoner. It is rare. Oba Erediauwa is the best that has happened to Benin Kingdom in the last 1,600 years.”
- April 29, 2016