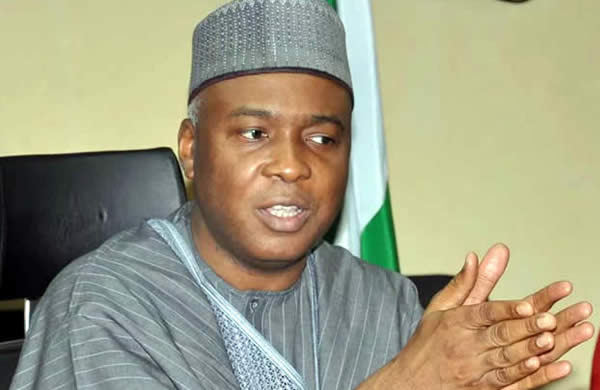 The Labour Party and 19 other registered opposition political parties have urged the Senate President, Bukola Saraki, to avail himself of the opportunities offered in our laws to clear his name.
Members of the opposition parties made their position known at a press briefing in Abuja, on Wednesday.


The National Chairman of the LP, Alhaji Abdulkadir Abdulsalam, who addressed the press on behalf of the other political parties, said the briefing was necessitated by happenings within the polity.
He said members of the opposition believe strongly that the ongoing trial of the Senate President at the Code of Conduct Tribunal had serious implications for the survival of democracy and this administration’s avowed commitment to fight corruption.
According to him, the President Muhammadu Buhari-led All Progressives Congress administration must do all within its power to ensure that the fight is carried out in such a way that it is not perceived as politically-motivated.
Abdulsalam said, “We want to put it on record that we are solidly behind President Muhammadu Buhari’s fight against corruption; a fight that we believe is crucial to the survival of our country.
“We however wish to note that this is not the first time that a President of this country would be declaring a war against corruption.
“In fact, the reason corruption is still a primary issue for the Buhari administration is that previous attempts have not been as successful as they should be.
The opposition politicians said while Saraki’s claim that he was being persecuted by his party should not be swept under the carpet, “we also believe that he must avail himself of the opportunities available to him in our laws, regardless of the conspiracies he may have suspected.”
They observed that one of the major obstacles in the fight against political corruption in Nigeria had been the way and manner it had been fought.
They equally noted that several past efforts had left Nigerians with the impression that the fight was selective and targeted at perceived enemies of government.
Abdulsalam said the LP and the 18 other political parties had unflinching faith in the nation’s judiciary to ensure that no citizen was punished unjustly, no matter the weight of accusations levelled against him.
The parties also expressed worry over the alleged bias of the Chairman of the Code of Conduct Tribunal, Mr. Danladi Umar.
They noted that the chairman had so far conducted himself more as part of the prosecution team rather than an unbiased arbiter.
Members of the opposition parties noted that the issuance of a “clearance” letter to Umar by the Economic and Financial Crimes Commission over allegations of corruption levelled against him gave a lot of room for suspicion.
They suggested that for the process to be seen as transparent, the Tribunal chairman should excuse himself and a neutral person be appointed in his place.
- April 28, 2016