Tiwa Savage opens up: Our marriage has been over for a while 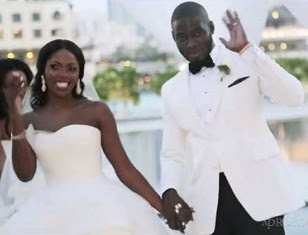 Nigerian songstress, Tiwa Savage has reacted to her husband’s, Tunji Balogun, recent internet meltdown where he accused her of, among other things, witchcraft and infidelity,
Savage, Friday night granted an all-revealing interview where she told her side of the story.

In the interview conducted by Thisday’s Azuka Ogujuiba and covered by pulse.ng, the songstress revealed dirty secrets about her marriage where she accused her husband of financial recklessness, drug addiction, abandonment and a whole lot of other issues.
“When I woke up, I thought they found him dead. My first thought was that we need to find him, he is suicidal, and we need to make sure he is alive. I didn’t even know what he had said. Someone took my phone from me; they don’t want me to see what was said online. I was just scared for his life,” she stated.
Tiwa traced the history of the whole saga to her husband borrowing the sum of N45 million from someone, which he lost refunding EFCC on his trail.
“I just found out that EFCC was investigating a case against him, and my brother called me from London and confirmed it that TJ is in deep trouble, and that some people might hurt him, that I should be careful. In my frantic mode to try and suppress this situation, I went to one of my big bros who can help. A week ago I told TJ that we were running out of Jamil’s food, but he didn’t do nothing. He complains, but cuts his hair twice a week. I have been searching for N45M so that they don’t kill him, so that they EFCC does not carry him,” she laments.
In the 45 minutes clip, the Mavin Dynasty First Lady revealed how she walked in on TJ taking cocaine in her house in 1004 (Victoria Island, Lagos).
“I didn’t even know he takes cocaine. I walked into the kitchen, and I saw him taking cocaine, so I screamed, and asked if that is cocaine. He started screaming that ‘What am I doing down here, where is the cocaine?’ How can someone without money take cocaine? I called his parents and complained that I can deal with weed, but cocaine, no. So I am dealing with his alcohol problem, you come home late, infidelity, cocaine, bad debt, jealousy over my success,” she said.
Among other things addressed in the video are the presence of a hitherto unknown third child, accusations of infidelity, as well as her mum’s innocence.
“The marriage is finally over, it’s been over for a while, and I have covered up for a while. What happened was God-sent, and he made it easier for me to walk away with what he did on social media. He got so many people angrier; he pulled so many innocent people into this, even his family. He made it easy for me to finally up and walk away,” Tiwa passes a verdict.
She concludes the video by apologising for the role she may have played in the whole saga saying; “If there is anything that maybe I overlooked, or didn’t love him enough, or made him less of a man, then I am sorry. I am absolutely sorry. Tunji I am sorry. But you know I tried everything, you know I love you so much, and I am sorry, I never wanted to divorce, and I never wanted it to get to this. I want you to get better and I would always pray for you.”