Woman Beats Her Landlord’s Wife To Death In Lagos 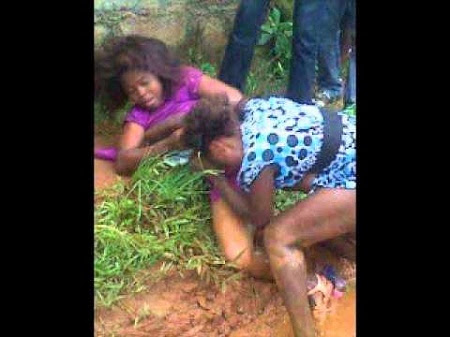 The Lagos State Police Command has arrested a resident of Shobowale Street in the Alagbado area of the state, Victoria Alaba, for allegedly killing the wife of her landlord during a scuffle.
The deceased, Mrs. Amosa Ogunyemi, had ordered Alaba and other tenants not to wash dirty clothes at one section on the premises because the compound was being messed up.

It was said that the woman ignored the order and was washing on the premises on Saturday when Mrs Ogunyemi approached her and told her to vacate the spot.

According to Punch, Alaba declined the directive, causing an altercation between the two.

A source close to the family told Punch that Alaba, in her 30s, pounced on the deceased and beat her up, but another resident said they engaged in a scuffle during which Ogunyemi gave up the ghost.

It was learnt that the landlord’s wife, who was said to be in her late 50s, was rushed to a hospital in the area, but was pronounced dead on arrival.

The source, who declined to mention his name, said, “The landlord’s wife had warned on several occasions that tenants should stop washing clothes at the spot, but Victoria (Alaba) did not listen. On Saturday, she chose to wash her dirty clothes at the spot again. The landlord’s wife walked up to her and told her to leave the spot. She refused and they started exchanging words.

“She pounced on Amosa (Ogunyemi) and pushed her to the ground. The woman became unconscious and was rushed to a nearby hospital, but she died. The tenant has been arrested by policemen from the Alagbado division.”

However, a resident of the area, who identified himself simply as Adamu, said the argument between the two women led to a fight.

“I was not there, but I was told that it was a fight and the woman (Ogunyemi) was overpowered by the tenant. She died in the process,” he added.

Other residents approached by our correspondent, who visited the neighbourhood on Wednesday, refused to speak on the issue.

In the deceased’s residence, a one storeyed-building, some sympathisers gathered under a tent outside, while others were with the husband of the late woman in a living room.

The distraught widower and a relative said the matter had been amicably resolved and called one of the deceased’s children, identified as Kazeem, to speak to our correspondent.

The son told Punch that the family members were not interested in taking any legal action against the suspect, adding that his mother had been buried according to Islamic rites.

He said, “We have resolved the matter and the police have released her corpse to us. We don’t have any comment on how the incident happened. All we are going to say is that everything is settled. Thank you.”

Lagos Police PRO, SP Dolapo Badmos, confirmed the incident in a text message, adding that the suspect was transferred to the State Department of Criminal Investigation, Yaba, for further investigation.

She said, “The Commissioner of Police, Fatai Owoseni, has ordered the case to be transferred to the SDCI for discreet investigation..."