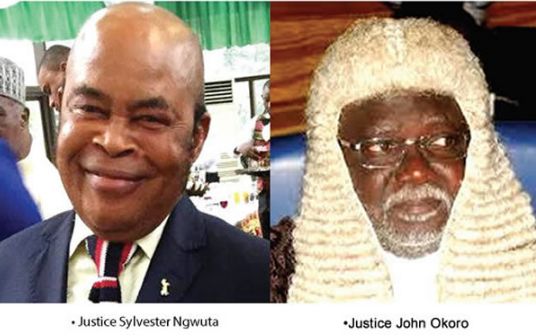 The two Justices of the Supreme Court, Sylva Ngwuta and Inyang Okoro, who were among judges recently arrested by the Department of State Services on corruption allegations, have voluntarily withdrawn from further participating in the proceedings of the apex court.The two senior judiciary officers would no longer sit until when they were able to clear their names.According to Punch's findings, Ngwuta and Okoro had not been sitting since they were released after their arrest along with other serving and compulsorily retired judges between October 7 and 8.The outgoing Chief Justice of Nigeria, Justice Mahmud Mohammed, disclosed this at a meeting he held with a delegation of the Nigerian Bar Association in his chambers last Thursday.According to a source, who attended the meeting, the CJN ruled out the call for the suspension of the two justices of the apex court or any of the other arrested judges.The CJN was said to have told the NBA delegation that the affected Justices of the Supreme Court had, on their own, decided to withdraw from further sittings of the apex court.The source stated, “The CJN made it clear that the NJC could never have suspended the arrested judges in the absence of any evidence presented by their accusers.“The CJN said the DSS, which levelled allegations against the judges, had not presented evidence against them to the NJC on which any possibility of suspending them could be based.“But he said the two affected Justices of the Supreme Court had, on their own, recused (withdrawn) themselves from sitting until when they are able to clear their names."
NBA also said their call is for the judges to recuse themselves, until they're able to clear their names.