Omg! See the Obituary of 6 children of same parents poisoned to death in Anambra state set to be buried next week 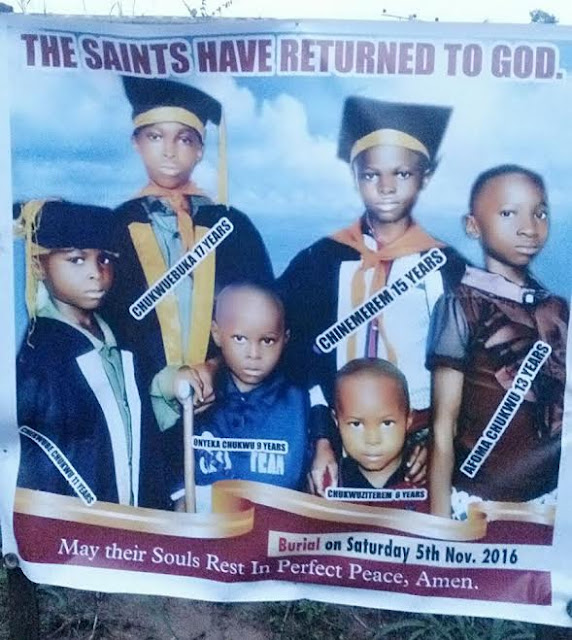 These six siblings, who were poisoned to death in Ekwulumili, Nnewi South LGA of Anambra State are set to be laid to rest on Saturday, November 5th, 2016. The children died after consuming food poisoned by unknown person on July 16, 2016. The parents are believed to have attempted suicide following the tragic death of their children. Posting their obituary announcement on Facebook, Ewenike Ogechukwu wrote:

"Very painful. What a remarkable sorrowful event? A question were asked " what shall it profit a man to gain the whole world and loose the kingdom of the life maker our God? " what a deep scar to the living future hope of the town? It's time we battle, fight and overcome atrocities and abomination in our various towns.Say "NO" to outrage, disgrace, scandal, eyesore, atrocity, horror, hate, anathema, aversion, curse, detestation, evil, nuisance, plague, shame, torment, hatred, dislike, repugnance, loathing, revulsion, abhorrence, disgust , wrongdoing, crime, offense.So my GoOd fellow Youths; If the painful death of this SIX CHILDREN of the same womb touches you, try and attend their burial which have been announced to be On Saturday 5th November, 2016. May their innocence souls be acceptable in the bosom of Almighty, Amen"
- October 30, 2016