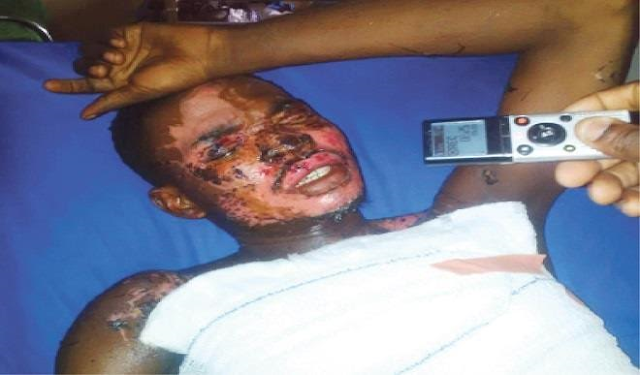 Iniubong Ime, who was attacked with acid by his ex-girlfriend earlier this month in Akwa Ibom State said he said no ill feelings toward her and no plan to seek revenge.
LIB recall that on Tuesday, March 6th, 26-year-old Lucy Daniel, an indigene of Ikot Annung II, in Ibesikpo Asutan LGA allegedly poured acid on Iniubong, 24, from Ikot Ntuen Oku,after he called off their relationship due to her troublesome nature.

Speaking to Daily Trust recently about his ordeal, Iniubong, who is currently receiving treatment at the University of Uyo Teaching Hospital recounted how a year into their relationship, he discovered that she is a troublesome person.

"She was causing trouble between me and my mother, my siblings and my friends, she caused trouble between me and everyone close to me, and succeeded in driving people away from me. So I decided to quit. She initially left but later started coming back, pleading that I should accommodate her, and that she wasn’t working and didn’t have anywhere to stay. Rather than accommodate her, I got her a job and also rented an apartment for her.

Thereafter, I told her that I had gone beyond my ability and she could continue her life from there. I pleaded with her to understand that we could no longer date. That was last year. She relaxed for a while and this year, she started coming around again. She would come at ungodly hours, so I told her that I didn’t welcome such visits and whenever she came around I would send her back.

"Of course, not peacefully.Even when she wasn’t coming around, she was always monitoring my movement and I knew it. But I didn’t bother because I had nothing to do with her anymore. Sometimes, when she spots me with anyone, male or female, she wouldn’t care to know who the person was and would just begin to insult them.

Recalling how the attack happen, Iniubong said on that fateful night, he had retired to bed when he was woken up by a knock on his door.

"On Monday, March 6, 2017,  I went to bed early but was woken up by a sound outside my door at about midnight. When I woke up I saw that my window net had been torn and I decided to find out who was at the door. When I opened the door, I saw it was Lucy, and before I could say anything she splashed the acid on me and ran away. I was in serious pain, and the burns on my body are severe. The only thing I could do at that point was to rush to a bucket of water which I usually kept in my room and poured it on myself with the hope that it would ease the pain. I then began shouting for help and people started coming out, including my siblings who were in the next apartment. They brought me to the hospital.

DT: After the incident, what was the reaction of her family?
Ime: Her mother was very angry. She is still not feeling well because she is hypertensive, so I can understand with her. She called me and said she would have nothing to do with Lucy henceforth. I was even told that the mother made efforts and apprehended her, took her to a local government chairman and was to be handed over to the police the next day. I don’t know what the chairman did and Lucy escaped from his custody. She’s still at large.My aunt has since reported to the police. But our major concern now is for me to recover. My treatment bills are being footed by my family and friends and it has not been easy. You know that injuries of this magnitude need a lot of care and money. So, I will appreciate if government at any level, interest groups and kind-hearted individuals can come to my aid so that I can recover. DT: When you recover, will you seek vengeance?Ime: That wouldn’t solve anything. I have decided to let it go and forgive her. In fact, I forgave her from the very day it happened. I thank God I’m still alive. I won’t take her back because I had long broken up with her before the incident. But I can relate normally with her. I have no hard feelings towards her. We won’t be lovers again, but she won’t be my enemy either. DT: Did you at any point promise to marry her?Ime: Not at all. I don’t make promises I cannot fulfill. I only told her that if we were meant for each other, destiny would bring us together. I however advised her that if she saw any other suitor, she could go ahead and marry him.
unknown