Update! 'Vampire was an evil child. He killed his classmate during a fight when he was just 12' - Mother 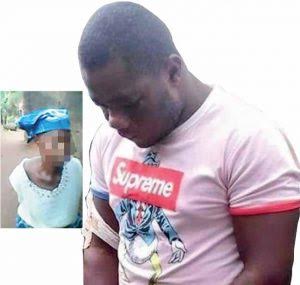 As the people of Umuokpu Umuezeala Abaja Isu in Nwangele Council area of Imo State heave a huge sigh of relief following the death of the most dreaded, vicious and deadly notorious robber and kidnap kingpin, Henry Onyekachi Chibueze, a.k.a Vampire, his distraught mother has described him as an evil child, who had always acted like someone possessed by Agwu (Evil spirit), Daily Sun reports.

It will be recalled that the deadly criminal otherwise known as Vampire was gunned down on March 2, at Umuowa bush in Ikwerre LGA of Rivers State by a combined Inspector General of Police Special Response Team from the Rivers State Police Command and Imo State Police Command.
Vampire who was born in 1981 to the family of late Chief Emmanuel Chibueze had been acting as if he was possessed with an evil spirit and had become a terror in the community since a tender age.
Before he acquired national and international notoriety, he had committed his first murder when he was just 12 years old during a fight with his fellow pupil, while still in primary five at Umuokpu Community Primary School. It was learnt that he ended his formal education in primary five after the murder incident for which his late father had to pay compensation to the family of the victim. After dropping out of school, he refused to learn any trade, but rather joined some undesirable elements called hunters from the  neighboring community who smoked marijuana and engaged in stealing people’s goats and fowls, which they either sold or killed and ate. It was also  gathered  that Vampire later started a commercial motorcycle business  on a hire purchase basis, operating  around Isu and Anara in Isiala Mbano mostly at night, returning to the village in the early hours of the morning.

His mother, Mrs Beatrice Chibueze who spoke to Saturday Sun in their village, said Vampire was an evil child as all efforts by his late father to ensure that he became a responsible person proved abortive.

“Henry Onyekachi Chibueze was born in 1981. My late husband had enrolled him at the Community School Umuokpu in Abaja, but he had to drop out at primary five after he killed his classmate during a fight at school and he was just 12 years old . That incident caused the family a lot of problem and my late husband had to pay compensation to the family of the boy before the matter was resolved. Henry had always acted like somebody who was possessed by Agwu (Evil spirit) and at a time the family had  thought of making a sacrifice to the gods of the land to see if that could make him act responsibly”, she revealed.

According to her, “when he dropped out from primary school he refused to learn any vocational skill, but had instead joined some bad boys in the community where he started this armed robbery and kidnapping. Even though our family is a polygamous one, my late husband had ensured that all his children were educated, but it was only my son who refused to be useful like his other brothers and sisters. In fact, it was the disgrace and shame brought to the family that led to the death of my late husband, who developed hypertension and died eventually.”

Mrs. Chibueze further disclosed that at the height of Vampire’s criminal exploits, members of the family including herself ran away from the village because he was prepared to kill anybody and that before he was arrested in 2015, he had destroyed the roof of his father’s house when he visited the village.

She, however, has an appeal to the police to release the two children of the late Vampire: Masters  Onyekachi  Chibueze and Ezinne Chibuzo Chibueze who had been in the custody of the police since, adding that the kids were innocent of the crimes their father committed.

Step mum reacts
Also speaking with Saturday Sun, Vampire’s stepmother Mrs. Francisca Chibueze, disclosed that he was too strong headed even as a child and did whatever he wanted regardless of what anybody said. She said that the late father who was a respected man in the community did everything within his powers to ensure that he was useful to himself ,but to no avail.

Onyekachi was a very stubborn child, he was always fighting in the community and he was the only child in the family who had refused to go to school or to even learn a trade and my late husband who was his father had done everything to ensure that he was useful to himself, but that failed . It was his criminal activities that led to his father developing high blood pressure that led to his death two years ago. “I had myself advised him severally to emulate his other brothers and sisters who are the pride of the family, while he was still younger before he became a big criminal and brought disgrace to the entire family and community”

Community, youth leaders express relief
Speaking in the same vein,  the chairman of the community, Mr. Obilo John, said that the death of Vampire was a great relief to the people of the community as he did not only bring the name of his family but that of the entire community to shame and disrepute.
The community leader said that Vampire was a bloodthirsty person as he had also killed one of his best friends who was popularly known as MC General of Abaja over a minor misunderstanding before he acquired the unenviable status of a notorious kidnapper.
“The eventual death of this boy who calls himself Vampire is a big relief to the community as every body is happy because of the bad name and disgrace his criminal activities brought to the community. Before the Police killed him, whenever he came to the village, people of the community would flee because he could kill at the slightest provocation. Henry had killed one of his best friends who was popularly known MC General and he had even killed his fellow pupil during a fight, while he was just 12 years old. I think that the boy must be possessed, because for him to have killed the number of people he had killed means that he was not a normal human being.

“The entire community now has resolved that henceforth any of its sons who is discovered to be delinquent would be dealt with immediately as the community does not want another Vampire who had destroyed the image of the community. We have also decided that any stranger who comes to the community will be monitored as well as who the stranger had come to see”
Also, one of the youth leaders in the community, Michael  Ibekwe, said that the people of the community were made a laughing stock because of the criminal activities of Vampire, as they were often referred to as community of criminals.

“We are happy that he was killed, because  people of  this community were being described as criminals as a result of Vampire and we have also decided that anybody who tries to emulate bad behaviour of Vampire would be severely dealt with because the good name of the community was damaged severely, and it would take several years to repair, just because of the activities of one misguided person who thought that the only way to make money is by kidnapping, armed robbery and killing his victims”