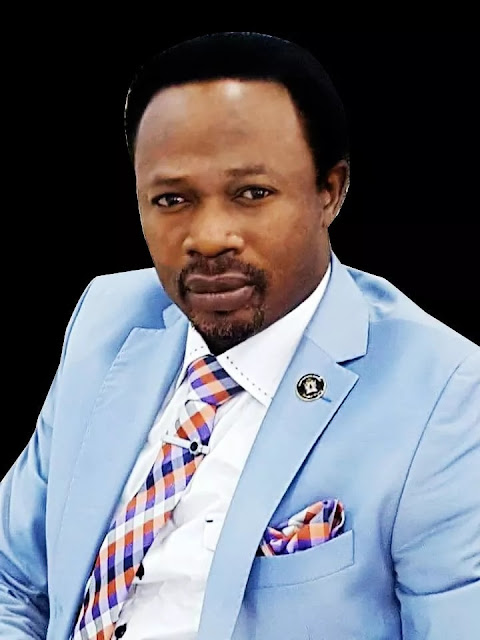 How does one know a true prophet? When he speaks, it comes to fulfillment. That is the story of this man of God with a special gift of prophecy, Bro. Joshua Iginla.


Every year, several prophecies and predictions are made by powerful men of God concerning Nigeria and the outside world, but as it stands, the founder and senior pastor of Champions Royal Assembly, Abuja, Bro. Joshua Iginla, has persistently led the pack of those who have always got it right; therefore, he is arguably a leading prophetic voice in the world.
The televangelist and philanthropist with prophetic prowess and stunning deliverance ministration has made predictions which have had direct impact on domestic and international affairs in recent years. For instance, he was the first prophet to have warned Nigerians about the invasion of the deadly disease, Ebola a few years ago.
In this piece, we chronicle major world events which were accurately predicted by Bro. Joshua Iginla in 2017.

1.  IPOB
On 10th September 2017, during a live service in his church, Bro. Joshua Iginla gave a word of prophecy concerning Nigeria, specifically regarding Biafra agitation and the form it was to take.
Quoting him, “I see something starting from a small group and it escalated in Nigeria.
“It started from a mini group and its now going high. I see bloodshed but we must pray for Nigeria.
“If there is one thing I want to recommend to the government or those at the helm of affairs, it is caution and there should be no radical decision.”
This prophecy came to fulfillment on Monday 11th September 2017 when the military invaded the residence of the IPOB leader, Nnamdi Kanu, and then tension arose all over the nation, especially the Eastern part.
Watch video here: https://drive.google.com/file/d/1YgGWCejlAz5ozPEUnJDa3doXDONIItML/view

2.   ROBERT MUGABE’S RESIGNATION AS ZIMBABWEAN PRESIDENT
Bro. Joshua Iginla, during his church services on the 14th of May and 2nd of July 2017 had foretold the recent leadership crisis in Zimbabwe.
In his words, “One of the African countries needs to pray against military intervention. I don’t want to say South, North, East or West Africa but one of the African countries should pray against military intervention so that their democracy will not be truncated.”
This prophecy came to pass on 14th November 2017, when Zimbabwe’s military leaders seized control of the impoverished Southern African nation, placing longtime leader, Robert Mugabe under house arrest and deploying armoured vehicles to the streets of the capital, Harare. The events led to Robert Mugabe’s resignation as the president of Zimbabwe, ending his 37-year reign. ?
Watch video here: https://www.youtube.com/watch?v=4A8hJF2NEqc

2. UHURU KENYATTA’S RE-ELECTION AS KENYA’S PRESIDENT
On Sunday, July 23rd, 2017, during a live service in his church, Bro. Joshua Iginla revealed how Uhuru Kenyatta would be re-elected as the president of Kenya. The man of God further disclosed that though the election would be marred by crisis and violence, Kenyatta would still emerge as the country’s number one citizen. In his words, “The nation of Kenya has to pray. I have been praying and I see a leader sitting on a seat. Three were taken out of the four legs of the seat and I saw this leader still sitting and didn’t fall. I don’t know how he managed to remain seated.”
This prophecy was fulfilled on Thursday, 26th of October 2017. The country of Kenya was enmeshed in brouhaha over who takes over its helm of affairs as the first election conducted a month earlier was annulled by the Supreme Court and a fresh one declared. True to his words, President Kenyatta was declared winner again.
Watch video here: https://www.youtube.com/watch? v=ukDQMwTcLTY

3. AERO CONTRACTORS’ AVERTED PLANE CRASH
On 22nd of January, during a live service, Bro. Joshua Iginla gave a word of prophecy concerning a Nigerian domestic airline.
In his words "I saw myself standing by a domestic airline, and while it was about to take off, there was an attempt to crash the airline.”
This prophecy came to pass on April 18th when a major tragedy was averted after an Aero Contractors’ flight from Port Harcourt headed for Lagos suffered a mechanical fault 20 minutes after takeoff.
From the video shared on the social media, the cabin filled up with smoke and distressed passengers expressed fear – many were heard praying, while others wept. Fortunately, the aircraft landed safely.
Watch video here: https://drive.google.com/file/d/1AVGHvhR5kH2e14Tl8li_WtRBLd5Kds91/view

4. PRESIDENT BUHARI’S HEALTH RUSHBACK:
Early March 2017, roughly one week before the return of President Muhammadu Buhari from his first medical trip, Bro. Joshua Iginla, during his church services gave a word of advice to the Nigerian president, Muhammadu Buhari to take good care of his health before returning. He prophesied about President Buhari rushing home to Nigeria without proper medical approval. In his words “I have a message for our president. The Lord says he should take care of his health.
“Do not allow politicians to use your life to play politics. It’s only the living that can rule Nigeria. I saw a vision where people hurried him to wear the boot and come home only for him to be rushed back.
“The reason is because there was an unfinished business medically. Let your persecutors persecute you and say whatever they want to say but make sure you give your health attention. It’s only the living that rules. The throne is yours and nobody can occupy it. That’s why you must stay alive.”
This prophecy was fulfilled on Sunday 7th May, 2017 as President Buhari jetted back to London for medical treatment the second time. He spent only 58 days in Nigeria before rushing back.
Watch video here: https://www.youtube.com/watch? v=WKwCPdFJWgY

5. ANGOLA PRESIDENTIAL ELECTION
On 30th April 2016, Bro. Joshua Iginla prophesied that he saw the ruling party in Angola retaining the presidential seat.
"I still see the ruling party succeeding and being on the throne," he had said.
Confirming this prophecy, on 24th of August 2017, Joao Lourenco of the Angola ruling party (MPLA) emerged winner of presidential election.

6. CRISIS BETWEEN ENGLISH AND FRENCH SPEAKING PEOPLE OF CAMEROON
On 31st December 2016, during the Cross-over Night and Candle Light Service, Bro. Joshua Iginla revealed that the crisis between the French and English-speaking people of Cameroon would deepen and worsen but God would intervene and restore peace.
His words: “The crisis between the French and English speaking Cameroonians will deepen but God will bring peace to the nation.”
Confirming this prophecy, the year 2017 opened up with the crisis deepening and getting worst.
Watch video here: https://www.youtube.com/watch?v=u4_95l8fwF0&t=10s

7. NIGER AND LAGOS STATE FLOOD
On 31st December 2016, during the Cross-over Night and Candle Light Service, Bro. Joshua Iginla prophesied concerning the issue of flood in Nigeria.
His words: “I see the issue of flood resuming, I see heavy downpour, and this will really affect a lot of buildings.”
Confirming the prophecy, massive flood took over Suleja, Niger State and Lagos Island on Saturday, 8th July and Sunday, 9thJuly 2017, respectively.
Watch video here: https://www.youtube.com/watch?v=oymQ3Hdiff4

8. NORTH KOREA MISSILE LAUNCH
On the 13th August 2017, in a live service, Bro. Joshua Iginla gave a word of prophecy on South Korea, North Korea and American battle, speaking specifically about the North Korea missile launch and reactions that would follow.
According to him, ‘’I see South Korea, North Korea and America trying to be a referee. We need to be careful. I see North Korea doing something of insult to America and for ego, there might be retaliation.
“There’s something North Korean president wants to do. It’s not a threat, I see something coming out. Why will it be an international insult? Why is there going to be a retaliation? This is what we should pray against. What the North Korea man has gathered isn’t ordinary. We need peace and we should pray for peace.’’
In confirmation, On August 28, 2017, news reports had it that North Korea had launched a missile attack against Japan. In reaction to this, Japanese prime minister said he had spoken by telephone with President Trump. “Japan and the U.S. stance are completely matched,” he said, adding that they discussed ways to tighten pressure on North Korea.’
Watch Video here: https://www.youtube.com/watch? v=n3h6N5WN9q8

9. LESOTHO 2017 ELECTION
On 30th April 2017, Bro. Joshua Iginla in a live service prophesied to the nation of Lesotho, speaking specifically about the 2017 general election and who would emerge as the prime minister.
His words: “I see somebody the current man who is sitting and I see someone who was there previously coming back to reclaim his seat.”
This prophecy was confirmed on 6th of June 2017 as the former prime minster, Thomas Thabane returned as Lesotho’s Prime Minister.
Watch video here: https://www.youtube.com/watch? v=rGqWznTxPTU
10. SOUTH KOREAN ELECTION
On 7th May, 2017, in a live service, Bro. Joshua Iginla gave a word of prophecy concerning South Korean 2017 general elections.
In his words: “I see a man with strong influence being supported by foreign nations and I see the ruling party saying bye to their seat. I see somebody with the sensitive name like Moon.”
Confirming this prophecy, on the 9th of May 2017, Mr. Moon Jae-In won the South Korean election.
Watch video here: https://www.youtube.com/watch? v=Z8KW6LcHbfY

11. FRANCE PRESIDENTIAL ELECTION
On 31st December 2016, during the Cross-over Night and Candle Light Service, Bro. Joshua Iginla gave a word of prophecy concerning France 2017 general elections and the aftermath.
He had said: “I see a new party pushing the ruling party from the helm of affairs. I see a man not too popular in politics, emerging as the president.
“I see a lot of attack that has to do with terrorism and protest.”
This prophecy was confirmed on 7th May 2017 as Emmanuel Macron of the opposition party emerged winner of the France presidential election.
Watch video here: https://www.youtube.com/watch? v=xLSNSzVZF6k

On 30th April 2017, in a live service, Bro. Joshua Iginla gave a word of prophecy concerning Rwanda 2017 presidential elections.
In his words: “I see the one sitting on the throne still retaining the seat”.
Confirming this prophecy, on 5th of August 2017, the incumbent president, Paul Kagame was re-elected and declared winner of the poll.
Watch video here: https://www.youtube.com/watch?v=Wm8-39RJ7Oc

On 11th June 2017, during a Sunday service, Bro. Joshua Iginla gave a word of prophecy about the president of South Africa, Jacob Zuma speaking about his impeachment charges and how he would come out of it.
His words: “Hard times are ahead for South African president, Jacob Zuma but it will not change the position God has put him.
“Nothing can change it except his tenure elapses.”
This was confirmed on 8th August2017 as Jacob Zuma survived impeachment charges, a motion of no confidence with only 29 votes in the parliament.
Watch video here: https://www.youtube.com/watch?v=gGbIVfv3TAQ

As 2018 creeps in slowly, we wait with bated breath for more earth-shattering words of prophecy from a man whom God uses to send warnings to the world.?