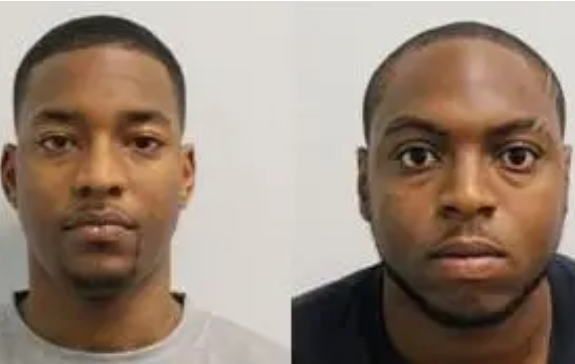 A Nigerian man and his accomplice have been jailed in the UK for 18 years for committing more than a dozen armed robberies at bookmakers across London.
Nathan Ugbaja, 29, and Cameron Weston, 29, were charged with conspiracy to rob and possession of a firearm in May 2018. Weston pleaded guilty to his involvement and Ugbaja was found guilty on Monday, 12 November following a six-day trial at Kingston Crown Court in London.
Both defendants were jailed on Wednesday, 28 November at the same court. Weston was
sentenced to eight years’ imprisonment, and Ugbaja was sentenced to 10 years’ imprisonment.

Weston and Ugbaja were responsible for a total of 20 robberies which took place between 27 December 2017 and Friday, 25 May. The first six offences occurred within a mile radius of each other in the Battersea area, and approximately a mile away from Weston’s home address. Weston and Ugbaja then moved their offending further afield to south of Battersea and into Croydon and Bromley.

Ugbaja (left) and Weston (right)
On two occasions the suspects committed three offences in one day.
In each of the robberies, Weston would produce a firearm covered in a sock and use this to threaten staff to hand over cash. Ugbaja acted as the getaway driver.
Detectives from the Met’s Flying Squad launched an investigation into the series of robberies in December 2017. Throughout the course of the five-month investigation, officers used a range of tactics to identify and track Weston and Ugbaja.
Detectives discovered a range of forensic and CCTV evidence which linked the pair to the offences. Analysis of the suspects’ phones also positioned them in the location of the offences on each occasion.
Covert surveillance was conducted on the pair, and Weston was arrested by officers from the Met’s Specialist Firearms Command after committing three offences in one day.
When arrested, Weston was found in possession of an imitation firearm and clothing from the robberies, Metropolitan Police reports on their website.