Linda Ikeji shows off her son’s N120m Bentley, shares photos of Jayce riding with her

Popular Nigerian blogger Linda Ikeji who recently became a mother of one has showed off her son Jayce’s Bentley Mulsanne on social media. 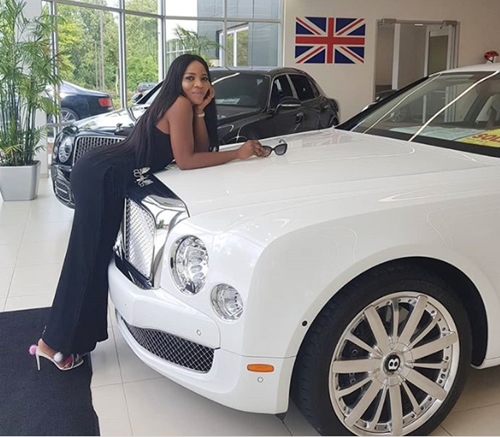 The blogger had promised to buy her son the expensive car even before he arrived. It was earlier reported that the blogger acquired the white Bentley Muslanne which reportedly cost N120 million in Atlanta before her baby arrived.
Jayce who was born on Monday, September 17, was spotted in photos, sitting like a boss in his expensive car.
The blogger who showed off the Bentley on her Instagram page noted that it recently arrived in Lagos.
In the photos, little Jayce was spotted in a white t-shirt paired with blue jeans while his mother rocked off white top paired with white pants.
The mother and son duo were spotted posing for shots in front of the newly arrived Bentley Muslanne.
See photos below: