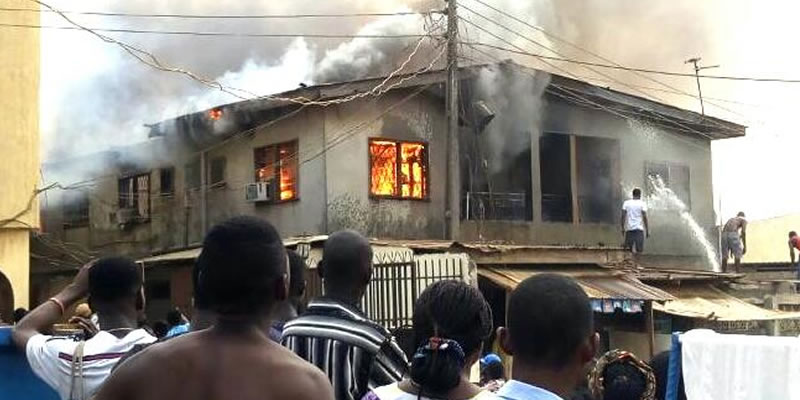 A 30-year old man, one Shola Adewunmi, who wanted to marry a 19-year old girl, one Miss Esther Omonitan, has vented his anger over rejection by killing the lover, her mother and two sisters at the same time in Lagos.
The suspect reportedly set their apartment ablaze at night and the four members of the family were burnt to death beyond recognition.

The incident happened at 21, Anjorin Street, Powerline area of Alagbado in Lagos where the victims reside.

Those who got burnt to death were the mother of the lover in question, Mrs. Gbenki Omonitan, the lover, Esther, who Shola had proposed to marry but was rejected and the sisters, Ayomide, 11 and Oluwafemi, 6.It was gathered that Shola had gone to the late Esther’s family and informed them of his intention to marry her. However, the family turned down his request including Esther because Shola was said to have no feasible means of livelihood. Shola was said to have been angered by that and threatened to deal with the family for refusing his proposal.

Following his threat, one night, Shola allegedly set their apartment on fire and the inferno burnt and killed the victims beyond recognition while all their properties in the house got destroyed.

The matter was reported to the police and Shola Adewunmi was arrested. The matter was later transfferred to SCIID Panti Yaba, for further investigation.

After carrying out investigations, the police found Shola culpable and charged him before the Ebute Metta Magistrates Court for murder.
When he was arraigned, tbe prosecutor, Inspector Babatope Julius, informed the Court that the matter was a case of murder and would need the DPP advice.

Thus, the Presiding Magistrate, Mrs. O.A. Salawu, ordered Shola Adewunmi to be remanded in prison custody without an option of bail. The court also directed the prosecutor to duplicate the file and send to the DPP for advice.

Shola may be sentenced to life imprisonment if the DPP finds him culpable and is tried and found guilty.

Meanwhile, as the DPP advice was not yet concluded, he will remain in prison custody pending when the DPP report will be ready.