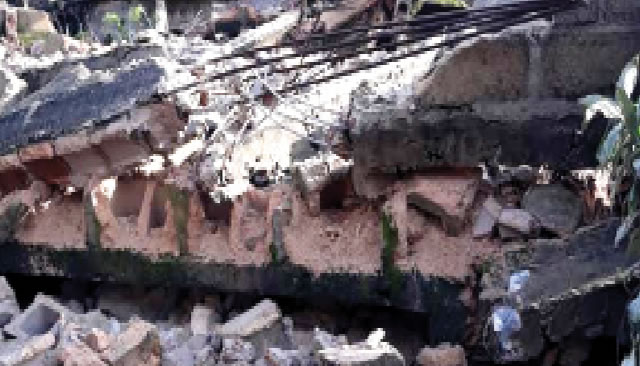 Three siblings, Taiwo, Kehinde and Idowu Yakubu, escaped death by a whisker when a two – storey building collapsed at No . 30 Osasa Avenue, Bariga , Lagos, on Sunday.
PUNCH Metro gathered that the 10 – year – old twins, Taiwo and Kehinde , and their seven -year – old brother , Idowu , were playing the Ludo game with their friend on the balcony of the building , when it partially collapsed around 9 . 30 pm.
The siblings , who fell from the second floor of the building , were rescued from the rubble , while about 30 other tenants were displaced.
It was gathered that the officers and men of the Nigeria Police Force , Lagos State Fire Service, Lagos State Traffic Management Authority , Lagos State Ambulance Service and the Nigeria Red Cross were on the ground to coordinate the rescue operation.
While some residents claimed that the collapse was as a result of vibration from the earthmover used for road construction , which had weakened the foundation of the building , others maintained that it was as a result of the weak state of the house.

“ We realised that the pillars supporting the structure were weak ; the pillar of the part of the building that collapsed was removed and it had not been replaced. The children were playing on the balcony in the affected area and that was why they were injured.A resident of the area , Collins Akuebuka, said , “When the incident happened, I was one of the first set of people to arrive at the scene . We rescued three children. Other tenants were not injured , but the landlord had been sick before the incident and he was immediately rushed to the general hospital.
“I am sure the building must have shown signs of distress before it eventually collapsed but the landlord decided to ignore it. We implore the government to come and assess houses in the area and do the needful by addressing the issue of incessant building collapse. ”
Another resident , Folake Williams, said if the government did not intervene speedily , more houses in the area would collapse.
She stated, “ The vibration from the earthmoving equipment used in the ongoing road construction is weakening the foundation of many houses in this area . It has also obstructed the free flow of water such that the houses now experience flooding ; if the government does not intervene speedily , other houses may be affected . ”
The father of the siblings, Oluwagbemiga , said he had to take his children to a private hospital nearby after they were allegedly rejected by the Gbagada General Hospital.
He called on the government to come to his aid as his family was stranded.
Oluwagbemiga said , “ I live on the second floor of the building with my family and I have three children. On Sunday night , I met my wife ’ s absence when I returned from work and the children were in the room. When there was power outage , I told them to go and play on the balcony.
“ They were playing Ludo game when the portion of the building they were on collapsed and they fell from the second floor . It was the neighbours and the government agencies that helped me to bring them out of the rubble.
“ We immediately rushed them to the Gbagada General Hospital , but they said there was no space ; so , we had to bring them back to a nearby hospital, where they are currently receiving treatment. The government should please help us, because we are now stranded . The building has been barricaded . ”
The Public Relations Officer , LASEMA , Mr Kehinde Adebayo , said the agency got a distress call through the emergency toll-free line , adding that four children were rescued.
He said , “ The agency got the distress call around 9 . 30 pm through the emergency toll-free line , 767/ 112, on Sunday , July 29 , 2019.
On arrival at the scene , it was discovered that a two – storey building had partially collapsed , injuring four children , two girls ( twins ) and a boy of the same parents , and another boy suffered bruises .
“ Further investigation revealed that the building had some cracks on the section that collapsed . The landlord, Pa Ayilara, who initially refused all entreaties to be moved out, was later taken to the Gbagada General Hospital for treatment. The building was cordoned off after all the residents had been evacuated by the emergency responders. ”
When the Public Relations Officer , Lagos State Building Control Agency, Titilayo Ajirotutu , was contacted , she said an integrity test would be conducted on the building to determine if it would be demolished.
She stated, “ It was a partial collapse but we have cordoned off the area and there are no casualties . A non -destructive integrity test will be conducted and once the result is out, it will determine if the house will be demolished or repaired.
“ Buildings in that area are old and we have asked all the house owners in the Osasa and Odunsin areas of Bariga to go for the non -destructive integrity test to check the state of the buildings , which they have not done .”
at July 30, 2019
Email ThisBlogThis!Share to TwitterShare to FacebookShare to Pinterest
Labels: Smith D