Pastor Who Was Exposed After Secretly Marrying Another Woman Resigns (Photo) 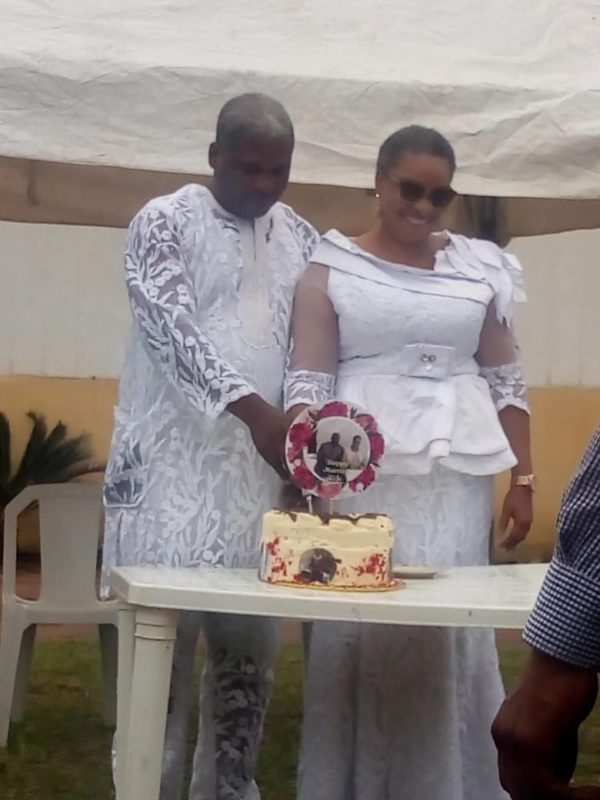 A pastor has resigned after he left his wife and secretly married another female pastor in Lagos.

Pastor Emmanuel Olusegun Taiwo
Pastor Emmanuel Olusegun Taiwo has finally resigned as a minister of God after his wife, Pastor Vicky, reportedly caught him in a secret wedding in Lagos with another female minister, Pastor Wonder.
the secret wedding took place at 6 Matthew Ojo Street by Whitehouse Bus Stop off Governor’s Road, Ikotun area of Lagos.
The resignation followed after one of his wives, Elizabeth, showed up at the venue of the secret wedding. But before then, Pastor Taiwo and Pastor Wonder had hurriedly left the venue over the embarrassment caused earlier by his other wife, Pastor Vicky.
However, their disappearance from the venue did not prevent Mrs. Elizabeth from telling the few guests, who were still present, that Pastor Taiwo was her husband before he dumped her for Pastor Vicky and now trying to get married to the new wife, Pastor Wonder.
When P.M.EXPRESS correspondent contacted Pastor Taiwo over the allegations by different women claiming to be his wives, he said he was no longer a pastor.
“I am no longer a pastor, I have resigned over the scandal to save the Church embarrassment” he said.
P.M.EXPRESS scooped that the newest wife, Pastor Wonder, is the 6th wife, Pastor Vicky was the 5th while Mrs. Elizabeth was the 4th wife in the series with three other women yet to be disclosed.
It was gathered that when Pastor Taiwo heard that Mrs. Elizabeth eventually came to the venue, he was terribly shocked and then decided to quit as a Pastor.
P.M.EXPRESS confirmed that the secret wedding between Pastor Olusegun Taiwo and the new wife, Pastor Wonder took place at Triumphant Base Global Ministry located at 6 Matthew Ojo Street by Whitehouse Bus Stop, off Governor’s Road in Ikotun, Lagos.
Pastor Olusegun, who lives at Ijoko area of Ogun State, had arranged the secret wedding at Ikotun area so that his wife would not know but information got to her and she came to the wedding venue to disgrace her erstwhile husband and his new wife, Wonder.
Pastor Olusegun was said to have got married and separated with many wives, who had six children before he got married to Pastor Vicky, who was also married but got separated and had two children in 2011. They had formalised their marriage at the Ikeja Marriage Registry, which subsists and started a Church known as Christ Like Evangelical Mission. Pastor Vicky was said to have pumped well over N5m into the Church but it collapsed and Pastor Olusegun reportedly absconded from home where the Church was located.
It was gathered that Pastor Olusegun might have convinced his new wife for marriage by assuring her that he had no woman in his life before Pastor Vicky surfaced at the secret wedding venue.
It was also gathered that the new wife, Pastor Wonder, was equally married before with two children but dumped her husband at Idioroko area of Badagry, where her church is located and secretly came to Ikotun to get married to Pastor Emmanuel Olusegun Taiwo.
- October 25, 2019