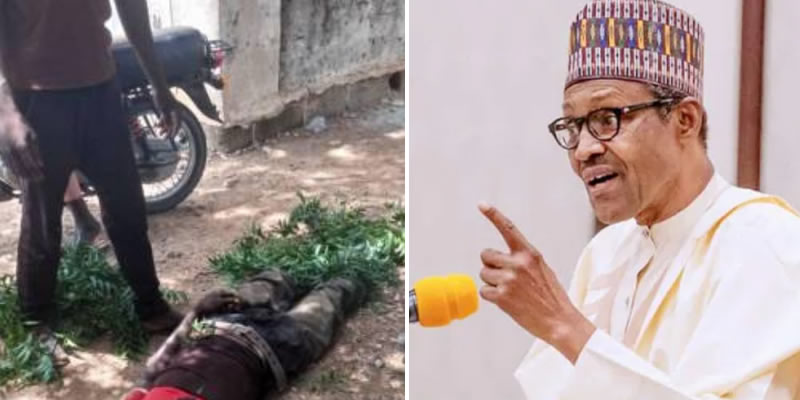 Anti-banditry protest turned bloody in Katsina on Monday after Operatives of the Nigeria Police Force shot dead a yet-to-be identified resident of Jibia Local Government during a staged protest over the recent increase of insecurity in the community.

Recall that Katsina had suffered from repeated attacks by armed bandits on communities recently. Unknown gunmen recently killed a 50-year-old man at Daulai Village under Safana Local Government Area; A 33-year-old operative of the Department of State Services (DSS), Sadiq Abdullahi Bindawa was also killed by bandits in the state; A Nigerian Army colonel was also killed alongside two other soldiers by bandits in Unguwar Doka Village under Faskari Local Government Area; Also, a chieftain of the Peoples Democratic Party in Rimaye town, Kankia Local Government Area of Katsina state, Alhaji Salisu Ali Sukuntuni, was recent kidnapped by unknown gunmen suspected to be bandits; Among many other cases of badits attacks in the state.

We learnt that the protesters had blocked Katsina-Jibia Highway in protest to the surge in bandits attacks when the victim was shot dead by the police, while many other protesters were injured.

According to reports, the protesters were demanding for President Muhammadu Buhari and Governor Aminu Masari to resign over the spate of insecurity in the state before one of them was shot dead by policemen.

See photo of victim below;