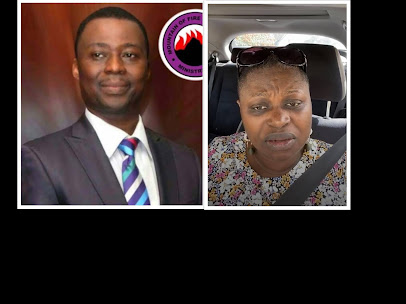 THE REALITY SETTING IN FOR THE DEVILISH MAUREEN OMONAYAJO BADEJO
surely not the best of times for the GIO TV, UK progenitor, Maureen Badejo, who is alleged to have consistently fabricated lies against Dr. Daniel Olukoya led Mountain of Fire and Miracles Ministries.
According to the report online, MAUREEN BADEJOs issues with MFM ministries and the General overseer, Dr DK Olukoya, on her Social media escapades, all her gimmicks, lies, fabrications, drama’s to gain followers and make money from her live streams are finally grooming to an unpleasant end.
Continuing with her lies for a few days now, she has stated that she had won the case filed against her by MFM on some of her latest YouTube and Facebook streams, but like you know her as the mother of lies and deceit, she is nowhere close to that. As a matter of fact, we believe her troubles are just about to start.
Maureen took more than she can chew this time, and we will advise that those of you donating money to her course should wise up and see her for the scammer that she truly is. Maureen Badejo has since August 20, 2020 been consistently broadcasting video programs maligning Mountain of Fire and Miracles Ministries and her General Overseer – Dr. Olukoya.
Rather than be provoked, the Man of God and the Church have been patiently engaging her legally while she has always boasted that she could only be sued in the UK. We have a very reliable scoop that after protracted efforts at pre-action engagement by the Church’s Solicitors in London were scorned by Maureen, she has finally gotten what she had been screaming for – A LEGAL ACTION IN THE UK!.
Although ALL THE LEGAL PAPERS WERE SERVED TO HER IN GOOD TIME as confirmed by the court, Maureen has FILED HER FIRST STATEMENT IN THE CASE BEFORE THE QUEEN’S BENCH DIVISION OF THE HIGH COURT OF JUSTICE IN LONDON, in which SHE CLAIMED SHE DID NOT HAVE ENOUGH TIME AND COULD NOT GET A LAWYER TO HELP HER. This is someone claiming to have won a case!
Based on the need to give her a fair opportunity to engage a counsel, THE JUDGE ADJOURNED THE CASE TO A LATER DATE. MFM and Dr. Olukoya, by taking the matter to court have not only shown THAT THEY HAVE NOTHING TO HIDE but have also afforded Maureen Badejo an opportunity to either prove all her scandalous statements against the Church and the Man of God or face the legal consequences of Social Media grandstanding.
Meanwhile, three other suits are pending against her in Austria by Pastor Kayode whom she claimed committed Fraud in the United States, Violation of Logo, an authorized user of the Trademark and Copyright materials, and in Nigeria for Libel. We will keep you informed of developments as they occur.