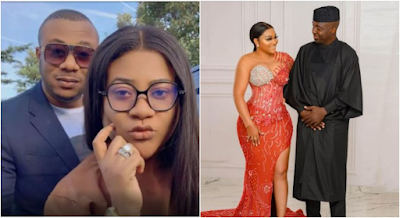 Nollywood actress Nkechi Blessing has replied to critics and a lady who vowed to snatch her husband Opeyemi for supporting Mercy Aigbe’s marriage to married man, Kazim Adeoti.

It’s no longer news that Kazim Adeoti was previously married with four children, whom he abandoned in Minnesota, Canada after he began dating Mercy Aigbe.

Nkechi Blessing’s comment did not sit well with many netizens who called her birds of the same feather with Mercy Aigbe and vowed to snatch her own Ekiti State husband, Opeyemi.

Responding to critics, Nkechi Blessing threatened to pour any lady who comes near her husband acid, saying it’s not even expensive to buy and deal with anyone.

She wrote: Acid no kuku cost!

Esabod Global News recalls it was an emotional moment for Nkechi Blessing after meeting veteran Nollywood actor Pete Edochie for the first time.

Taking to her Instagram page, Nkechi Blessing shared a video of her passionately hugging Pete Edochie alongside her colleague Destiny Etiko.

Nkechi Blessing expressed excitement about featuring in the same movie with Pete Edochie, saying she grew up watching him and was her late mother’s favourite actor. 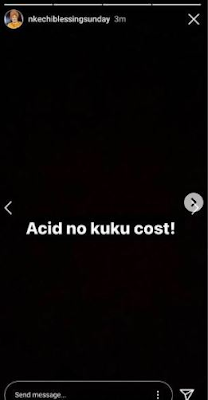