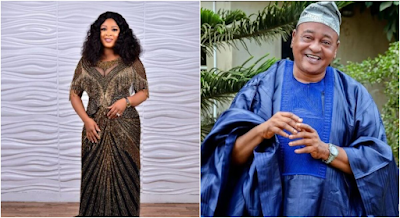 Nollywood actress Bidemi Kosoko has showered lover on her father Jide Kosoko on his 68 birthday as she reveals what makes him angry.

Sharing a cute photo of her father, Bidemi described him as the best father, first love and prayed that God would fill his heart with more joy.

Bidemi Kosoko added that his father always gets angry whenever she reminds him about ageing, notwithstanding she would still tell him that old age is knocking and seeing full grey hair on his head.

She wrote: Omo Moron folu okun oye. Pamu pamu. Happy birthday bestest dad ,I hope your day is as special as you are My Number 1 Love .

May God fill your heart with more joy than ever . Love you papa @princejidekosokoIf I say he is aging now he will get angry let me sha still say it “daddy old age is knocking ooo, full gray hair is what am seeing bayi.

Esabod Global News recall that in August, Bidemi Kosoko took to her Instagram account to announce to her fans and colleagues that she had officially tied the knot with the father of her kids.

The reports revealed that Bidemi and her lover have been living together as a couple since she had her child 2 years ago.

According to the mother of one, she and the father of her child have finally tied the knot and she has officially become a Mrs.