Actress Toyin Abraham Eulogises Jide Kosoko On His Birthday As Iyabo Ojo, Nkechi Blessing, And Others Ignore Him 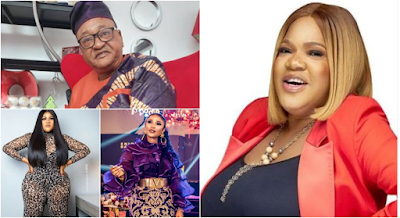 Earlier Jide Kosoko took to his Instagram page to share a short video of himself appreciating God for the new age.

Toyin Abraham also joined the social media celebrate as she shared a photo of Jide Kosoko describing him as her daddy.

According to Toyin Abraham, Jide Kosoko is a wonderful father, always looking out for her and other young actors.

In her words: Happy birthday my daddy @princejidekosoko you are such a wonderful Father and always looking out for us. God bless your new age sir Agbayin adale sir.

This is unlike Iyabo Ojo, Nkechi Blessing, Mercy Aigbe and other Nollywood stars as they neither celebrated the veteran actor on their Instagram page nor his comment section.

In 2021, Iyabo Ojo and Nkechi Blessing were at war with Jide Kosoko regarding the rape case of Baba Ijesha and the daughter of comedienne Princess.

Iyabo Ojo and Nkechi Blessing were suspended in the movie industry, a decision that did not sit well with many Nigerians and Nollywood stars.

After several consultations, Iyabo Ojo and Nkechi Blessing apologised for their wrong, and the association of Nollywood stars led by Jide Kosoko and other veteran actors lifted their suspension.

Iyabo Ojo made this known in an interview with Riyah Abdul, of which she posted the snippet on her Instagram page.

In the interview, the actress was asked what is the biggest misconception people have about her, she said: “People think I am a fighter”.

Ojo was also asked what her biggest challenge was  and she replied, “Being a single mum.”

“Even we that you think we are so rich, we get broke sometimes. Life of a celebrity is not cheap it is very expensive”.

Iyabo Ojo who has produced movies like ‘Under the carpet’ Divorce not allowed’ amongst others, revealed that the desire to make her own money made her become a movie producer.

When asked why she ventured into film-making, she replied: “I just wanted to make my money”.

She also said that there are bad days in business. According to her: “Even in business we have our bad days. On those bad days, we lose money”.