‘Attention Seeker, Why Not Help The Family Make His Grave Decent’, Actor Yomi Fabiyi Dragged After A Visit To Baba Suwe’s Grave 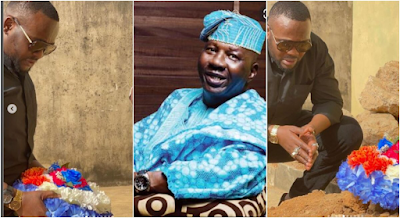 Nollywood actor Yomi Fabiyi has been dragged on social media after storming the grave of late comic actor Baba Suwe with four camerapersons upon his return to Nigeria.

Taking to his Instagram page to share a video of the visit, Yomi Fabiyi said upon his return to the country, he made it a point of call to visit the grave of Baba Suwe and offer prayers as part of his last respect.

Yomi Fabiyi prayed that the soul of the late actor would continue to rest in peace, adding tha Baba Suwe would never be forgotten.

He captioned the video: Upon return to Nigeria, I made it a point of call to PAY VISIT and OFFER PRAYERS as part of my last respect at the gravesite of the boss and pathfinder Late Kìng Babatunde Ayinla Nurudeen Omidina a.k.a Baba Suwe who passed away recently.

May your soul continue to rest in peace Pressy. An ERA is gone. You will never be forgotten. I will sincerely and personally miss you sir. Odigba kan naa. RIP

As expected, many netizens reacted as they blasted Yomi Fabiyi for visiting the grave, with four cameramen questioning if he was shooting a movie or a publicity stunt.

Others also called on him to help the family build a proper and decent grave instead of laying a wreath there.

gbadamosifatai wrote: Attention seeking attempt, through cheap popularity stunts. if you so much cherish the departed icon ,why not help the family make his grave decent , a pile of clay more after several weeks is not decent for the memory of a great icon as Babatunde Omidina.

boluwatifecarry wrote: His grace isn’t even properly covered yet. Flowers on a pile of clay? And then four cameras to add colour and the voice of God to the prayers. Hehehehe.

debby.hardesanya1 wrote: All this na clout chaser jare, must u do video for us to know or for the gram.

tiendasportsng wrote: Where you shooting a movie there? The camera is too much sir, some things are better done off cameras, now I feel like you are chasing clout with what you went there to do.

Esabod Global News recalls the comic actor who dominated the Yoruba movie industry for decades as an actor and producer died today November 22nd after battling with an undisclosed illness.

Confirming his death, Mr Latin, the president of the Theatre Arts and Motion Picture Producers Association of Nigeria, in a chat with PUNCH said “It has been confirmed that Baba Suwe is dead. I just got off the phone with his son who confirmed that the actor is dead. I don’t have much details about his death.”

at January 11, 2022
Email ThisBlogThis!Share to TwitterShare to FacebookShare to Pinterest