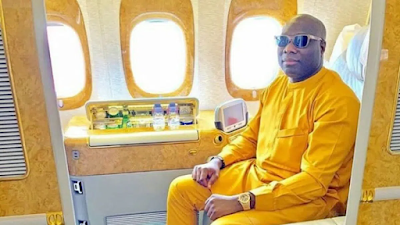 Mompha, who was detained on January 10th, is currently on trial with his firm, Ismalob Global Investment Limited, on an amended 22-count allegation of computer fraud and money laundering in the amount of N32.9 billion levelled by the EFCC against him.

Mompha will be charged to court soon, according to EFCC spokesman Wilson Uwujaren, who confirmed his re-arrest to newsmen in a statement captioned, ‘EFCC re-arrests Mompha for alleged money laundering.’

The statement reads ”The account of one of his companies, Ismalob Global Investment Limited Bank, a Bureau de Change company, domiciled in Zenith Bank Plc, was allegedly used to launder funds derived from unlawful activities.

“Investigation has revealed a fraudulent transfer slip of $92, 412, 75 found in the suspect’s iPhone 8 device. He will soon be charged to court.”

Esabod Global News recalls that Mompha was detained by the Nigeria Immigration Service on October 18, 2019, at the Nnamdi Azikiwe International Airport while boarding an Emirates Airline aircraft to Dubai, after being placed on the EFCC’s watchlist.

Mompha is accused of receiving unlawful monies on behalf of cyber fraudsters all around the world in exchange for commissions through his registered firms.

This comes just a few weeks after Bobrisky and Mompha had an online brawl.

Bobrisky implied that he and Mompha were dating, and Mompha requested him to disprove the rumor.

Mompha threatened to sue Bobrisky after the two exchanged comments on social media.

Bobrisky was forced to issue a disclaimer as a result of this.

Bobrisky stated in the disclaimer that he and Mompha were merely friends and never dated.

Mompha, on the other hand, has threatened to deal with Bobrisky when he gets in Nigeria.

He (Mompha) revealed that he is in Nigeria on his verified Instagram page.

“Skyman has landed Nigeria. About to make some billions in Lagos” Mompha wrote.