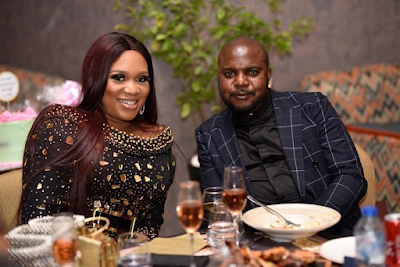 A few days ago, businesswoman, Sandra Iheuwa, caused a stir online after she removed her husband of four months, Steve Thompson's surname from her social media handle. She also removed "married to a boss" from her bio.

The couple also unfollowed each other after removing their photos from each others IG pages.

This came as a shock to so many as their four-month-old marriage was contracted in August 2021.

A source who is close to the couple told LIB exclusively that Sandra moved out of their matrimonial home in Osapa-London in Lagos state last week over her husband's alleged constant act of infidelity which is usually unprotected. The source said even the week they returned from their honeymoon, the couple had a quarrel after she suspected he was cheating on her as he was always sneaking to take phone calls, something he never did while they were dating.

Report has that Mr. Thompson even slept in a hotel for two nights the same week they returned from their honeymoon.

The source said Sandra has tried to make him stop cheating on her but he refused. She got fed up last week and in anger moved out of their home. The source said family members are currently trying to see how they can resolve their differences as Mr. Thompson is never remorseful for his actions.

At the moment Mr. Thompson has deactivated his account. Sandra is said to be cooling off somewhere and no one knows if she will be returning to the marriage. This would be Mr Thompson's 3rd marriage and Sandra's 2nd marriage

at January 09, 2022
Email ThisBlogThis!Share to TwitterShare to FacebookShare to Pinterest