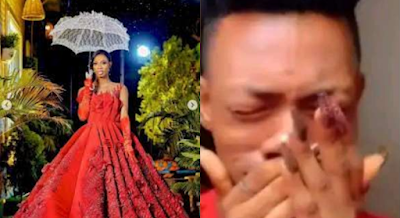 A video where popular Nigerian cross dresser, James Brown was kicked out of PapayaX’s birthday party has emerged.

Esabod Global News earlier reported that James Brown broke the internet after he shared videos of himself storming the party.

James also took to his Instagram page to alleged that he spent 5 million naira on his outfit.

A video where James angrily stormed out of the party has emerged. James Brown was earlier denied entry into the party premises by the bouncer, despite getting an invite from the celebrant.

He angrily stormed out of the event, but was called back by the celebrant.

Watch the video below:

Esabod Global News recalls that James Brown recently took to social media to mock his senior colleague and former “aunty’”, Bobrisky after he was kicked out of Benin.

According to James Brown, Bobrisky should Come and learn how to respect people’s culture.

Bobrisky got dragged by Edo people after he asked the Oba of Benin to marry him.

He recorded a video in which he expressed his joy while being driven in convoy and made a joke about the Oba of Benin wanting to marry him.

Ehi Ogbebor, his host, shared the footage on her Instagram account and expressed her surprise and disappointment.

She wrote: Just to state that am a Benin Woman that takes Pride in my culture and Heritage. I ddnt find it funny too at all. I wasn’t there when the video was done neither did I know about that video. I saw it on social media too n was in utter shock. I was upset too. ….. We don’t joke with Our KING. Our Great KING…..Pls find it in your hearts to forgive … forgiveness is divine. No one is above mistake. Walahowoiwoi. OBA GHATOR KPERE……ISEEEEEEE.

at January 11, 2022
Email ThisBlogThis!Share to TwitterShare to FacebookShare to Pinterest