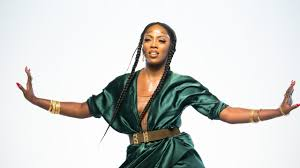 Single mum of one and Pop diva Tiwa Savage has revealed how she narrowly escaped being slapped and attacked at a beach in Lagos on Sunday night.

Making the revelation on her Instagram page hours ago, Tiwa Savage disclosed that she went to the beach without her security and was almost slapped by an undisclosed person.

“Omo I do mistake go beach without security, and small cash. Omo I nearly shop slap that day.”

Tiwa also shared videos of herself at the beach with fans hailing her.

Responding to them, the mother of one wrote: “Hahahahaha I love you all too but from afar.”

In another post, she wrote: “Nothing like a calm night in Lagos this days. E even too cost step out.”

Esabod Global News recalls that Tiwa Savage was listed as Google’s number one musician in Nigeria following the release of her sex video, late 2020.

The music star had earlier said during an interview that someone was blackmailing her with the sex video but she was not going to pay anybody for doing something natural. The 10-second was eventually released and it is living rent-free in thousands on mobile phones around the world.

Tiwa also made the news for her clash with Seyi Shay and for the release of the EP Water & Garri and the song ‘Somebody’s Son’ featuring American R&B star Brandy.