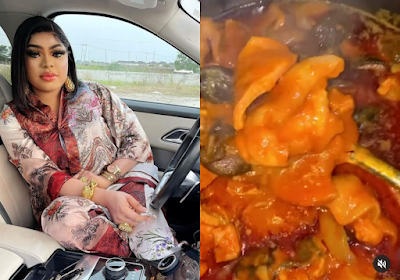 The internet sensation who recently had a fall out with his best friend, Tonto Dikeh took to his Instagram page to show off the quite rich pot of stew he prepared.

Via his caption, Bobrisky noted that he can’t wait to go his husband’s house so he too can enjoy with him.

“Can’t wait to be in my husband house, dis is how expensive ur pot of soup should be, girls treat the man that f**k you well, ” Bobrisky wrote.

Esabod Global News had earlier reported that after much criticism from the people of Benin, Bobrisky tendered apology  for asking the revered Oba of Benin to come and marry him.

Bobrisky was in Benin City last week for an event organised by interior designer Ehi Ogbebor and as he was being driven in a convoy, he made a video where he was showing his excitement for being in the city.

While speaking, he hailed himself for being a “pretty woman” and then mentioned that the Oba should come and marry him.

Some Edo people did not find it funny and they threatened they were going to attack him if they see him.

He was forced to make another video apologising for his comment.

He admitted that he was only catching cruise and never meant any of what he said.