‘I’m Mixing Your Song, And You Have The Audacity To Be Watching Ball’ Singer Simi Berates Her Husband, Adekunle Gold 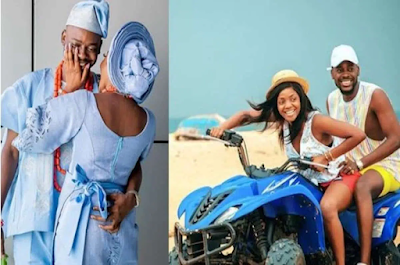 Nigerian female sensational singer Simi Ogunleye has left many fans gushing over the bond between her and her husband, Adekunle Gold.

This comes after Simi took to the microblogging platform Twitter to make fun of her husband, leaving mixing of his song to watch football.

Adekunle Gold had taken to his Twitter page to hail the Super Eagle after they recorded a massive victory against Sudan to top group D with 6 points.

Reacting to the post, Simi questioned her husband’s audacity in watching the football match while she was busing mixing his song.

She wrote: I’m mixing your song and you have the audacity to be watching ball.

In an Instagram post on Friday, the singer expressed disappointment over the empty social media pages of some budding singers.

You are a ‘serious’ growing artist and you have only three posts on your page; a picture of the sunset, one of aeroplane, and one of your shoe.

“Caption – Lost, but don’t find me. Nothing with your music in it. That’s not a great look. If you want it bad, always be selling yourself. Leave the mysterious sh*t for when you’ve won! Even then, still leave it,” she wrote. 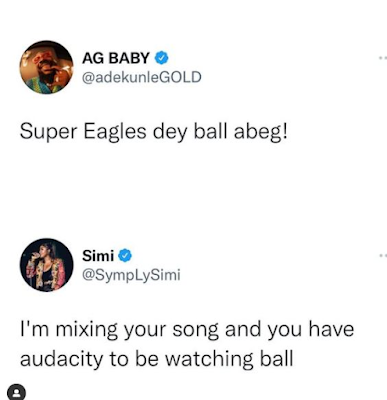