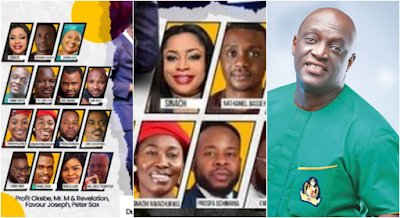 Following the confession of popular gospel artiste, Sammie Okposo, on Tuesday about cheating on his wife, Dunamis International Gospel Centre has deleted his name from the list of gospel artistes slated to minister at their concert this Friday.

The Wellu Wellu master, as he is fondly called, took to his Instagram account to reveal that when he travelled to the United States, he was involved in an intimate relationship with another woman.

The revelation has sparked various reactions from Nigerians on social media.

Esabod Global News observed that from the flyer posted earlier today on the Instagram page of the senior pastor Dr Paul Enenche, Okposo’s name and picture has been pulled off the minister’s list. While artistes like Sinach, Nathaniel Bassey and others will still be ministering at the event.

Sammie Okposo’s confession had come hours after the US-based lady in an  interview called out Okposo for impregnating her and abandoning her.