'It Is Not Me, Most Of The Videos Were Edited", Mummy GO: Evangelist Olufunmilayo Adebayo Cries Out Over Death Threats 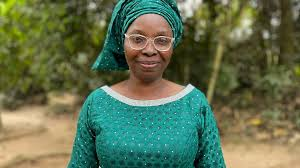 General overseer of Rapture Proclaimer Evangelistic Church (RAPEC) Ota, Ogun State Evangelist Olufunmilayo Adebayo aka Mummy GO, who has been trending for weeks over her controversial messages, has cried over death threats and attack from Gunmen.

Esabod Global reports that the clergywoman, who is over 50 years old, preaches about hell and what people can do to avoid going to hell.

According to her, she was called into leading people to heaven 27 years ago, though her church was set up 24 years ago.

Evangelist Adebayo said that most most of the videos and memes in circulation were edited and did not portray the truth.

“It is not me, most of the videos were edited and all those memes. Even Lucifer, Satan if you bring him today to become pastor will he say those things? Even Lucifer will not say all those things talk less of someone who calls herself holiness preacher. The people who are doing these things started over eight years ago. Sometimes they make use of magazines. When that didn’t work, they sent gunmen after me,” she told BBC Pidgin in a recent interview.

“I’ve been receiving some strange calls saying ‘Evangelist Funmilayo you are affecting us. Many of our members hear your message and they pull out of our church. If you don’t stop, we will kill you.’”

She added that she has no problem with the new title — Mummy GO — Nigerians gave her.

“That is my new title. I don’t feel bad, why should I feel bad?” she asked.

Adebayo, however, admitted that she preached the sermon that “footballers will not make heaven.”

She claimed that the Antichrist will be introduced into the world through the World Cup.

The preacher also owned up to teaching that women who wear jewellery, make-up, attachment, jeans and seductive wears risk going to hell.

“There is something we call modest, I have travelled to many Muslim countries, you will not see any of the Muslim women wearing anything that will expose their body, even their air hostess the way they dress, you will know that this people fear God,” she said.