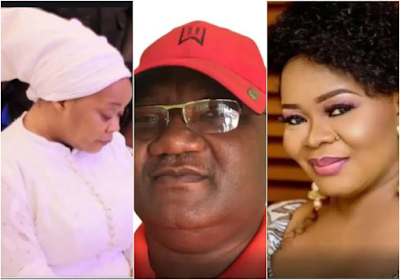 The later part of year 2021 was challenging for Nollywood actress Bimbo Oshin due to her husband’s death, Dudu Heritage.

The death of her husband came a few months after she celebrated her 50th birthday, and since then, Bimbo Oshin has been away from the screen of many movie lovers and her fans.

However, Bimbo Oshin has taken to Instagram to announce her return to the movie set as she prays to God to journey with her.

Esabod Global News recalls that the death of Bimbo Oshin‘s husband made headlines on Monday 13th September 2021, and many of her colleagues took to their social media page to commiserate with the actress.

A statement by the Ibadan Golf Club disclosed Ola Ibironke slumped at the golf club around 8:30 pm while he was out with his friends.

The statement added that efforts to resuscitate him proved abortive, and he was rushed to the hospital, where he was later confirmed dead.

Upon her return to Instagram, Bimbo Oshin in a lengthy post on her page, said there is nothing complicated than saying goodbye to a loved one, but she gives thanks to God in everything.

Bimbo Oshin said it has not been easy to miss her husband as it still feels like a dream to her; however, she is aware that her late husband wishes to see her happy and not lose hope.

The actress expressed appreciation to everyone, including monarchs in Ibadan and Nollywood stars who stood by her and showed her love during her mourning period.