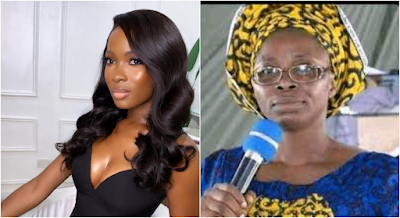 Osunde made this statement in reaction to a skit made by Maraji where she mimicked the Evangelist known for her fire-and-brimstone sermons where she proclaimed the wrath of God upon anyone who violates not only the scriptural rules but also her alleged self-made rules.

In the skit, Maraja while lip-syncing one of Mummy G.O’s messages condemned the dressing of star singer, Tiwa Savage.

The skit has elicited diverse reactions from fans and celebrities online.

In her reaction, Jemima Osunde said:” For real though, someone needs to arrest that woman 😩😭😂😂😂😂😂 I said hello on the phone and remembered her nonsense”.

Joining the fray, actress Chioma Akpotha wrote in the comment section:”I dont know if i should laugh or just cry for this Mummy G.O”

Aphricanace wrote:” Are you sure you’re not her in disguise cos the way you nailed this one ehn…no be here o.

Esabod Global News reports that the male members are forbidden from leading funky ways of life which include engaging in electrifying dance while female members are not allowed to do facials, fix nails or wear skimpy dresses or jewelry.