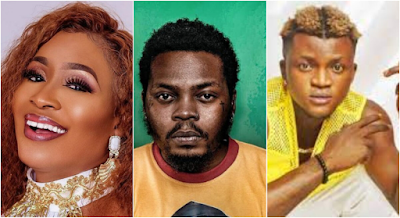 Media personality, Kemi Olunloyo has urged Olamide and dancer, Poco Lee to teach Portable how to monetize his music.

Olunloyo made this known via a video posted on her Facebook page.

According to her: “Portable sang Fuji on an Afrobeats sound. He created something huge.Olamide, Portable will make a lot of money. You need to explain to him about streaming revenues. His streaming revenue will be heavy.

If we are talking about 10 million streams in just the last thirty days, that is huge money.Olamide, Poco Lee should tell him what to do”.

Speaking further, Olunloyo also counseled Nigerian artistes to learn the art of producing their own songs.

“Artistes should learn music production. Nigerian artistes will tell you they don’t know how to produce their own music. My son produced his own music by himself..I bought him equipments.Brandy spoke Yoruba in Tiwa Savage’s song, Ed Sheeran spoke Yoruba in Fireboy’s song .Use this opportunity to elevate Fuji musician.I love Fuji music, young people should brand Fuji music”.