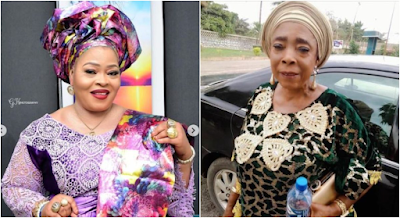 Veteran Nollywood actress Toyin Tomato has shared an update on the health of her colleague Yoruba actress, Kudirat Odukanwi, popularly known as Iyabo Oko, who died and woke up after 3 hours.

Taking to her Instagram page, Toyin Tomato revealed that Iyabo Oko is currently at the Obafemi Awolowo teaching hospital.

Toyin Tomato reaffirmed that Iyabo Oko is still alive and responding to treatment as she called on Nigerians to pray for her.

In her words: At OAU TEACHING HOSPITAL pls continue to pray for @iyabo_oko she’s still alive & responding to treatment.

Esabod Global News recalls that Iyabo Oko who had been bedridden for close to five years passed on Wednesday, January 5 only to return back to life about three hours later in the wee hours of today, Thursday, January 6, 2022.

The daughter of the 61-year-old actress, Olamide, who had initially confirmed the death news, broke the news of her resurrection moments ago.

“Good morning everyone, Iyabo oko is still alive oo, my mum is still alive o. I was the one that announced and posted that she died after my brother called me to say doctors confirmed her death yesterday but she came back to life after three hours, i have been crying, thank God she is back to us. We thank God ooo” Olamide disclosed.' 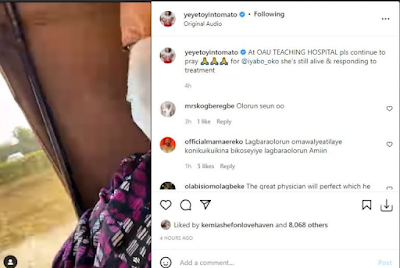