PORTABLE OPENS UP ON FIGHT WITH KOGBAGIDi 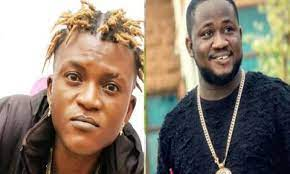 Habeeb Okikiola, better known by his stage name Portable, has spoken out about his feud with his promoter, Quadri Taoreed, alias Kogbagidi, following the success of his hit tune “Zazu Zeh.”

recalls that a video went viral on social media on Thursday, January 6, 2022, where Portable accused Kogbagidi of taking the SUV he was recently gifted by a fan. The singer who wielded a baseball bat

could be heard at the top of his voice asking Kogbagidi to return the car, while also alleging that he had ‘settled’ him on several occasions by giving him money on different occasions. He said, “I gave you $500 and N500,000 twice. You have ripped me off. You know that you are a ripper.”

However in a recent interview with GoldMyne Tv, Portable said the viral video was a ploy to make people to keep talking about them. He added that controversy brings money.