‘This Hajia Status Is Sweeting Me’ Actress Mercy Aigbe Brags 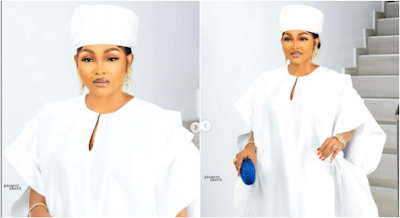 Nollywood actress Mercy Aigbe has taken to social media to brag about her new status and Muslim name following her marriage to movie marketer Kazim Adeoti.

Amidst criticisms, Mercy Aigbe has continued to share beautiful photos and moments with her new husband.

Captioning the post, Mercy Aigbe noted that she is so excited about her new Hajia status adding her Muslim fans need to teach her a lot of things about the religion.

She wrote: Ok I must confess this Hajia status is now sweeting me ….. My Muslim Fans y’all have a lot to teach me oh.

Cos with this my New Muslim name I’m considering. Hajia Minnah, baby girl for life

According to Angela Tolulade, a United States of America-based woman, who claimed to be a family friend to the Adeotis told Punch Beats that Adekaz and Juwon were not on good terms before Aigbe came into the picture.

She further revealed that Funsho was told about Adekaz marrying Mercy Aigbe and all due process was followed.

She said, “Adekaz and Funsho got married 20 years ago in the US. A licensed mortgage broker, Adekaz relocated to Nigeria to start a movie production business.

“He came to Nigeria with Funsho, who later went back to the US, saying she did not want to stay in Nigeria. The marriage was on until Funsho refused to come over and her husband kept pushing for her to be around. It is important to note that this matter had dragged on for almost two years. He (Adekaz) told her (Funsho) point-blank that he would marry another wife if she did not return as agreed.”

Tolulade also insisted that Adekaz never shirked his responsibility to their three children. She said, “Till date, Adekaz still carries out his duties as a father. He pays the school fees of the children and foots their other bills. Funsho cannot say he neglected her because she was the one adamant about not returning to Nigeria.”

Speaking further, the family friend stated that despite pressure from her husband, Funsho refused to relocate to Nigeria.