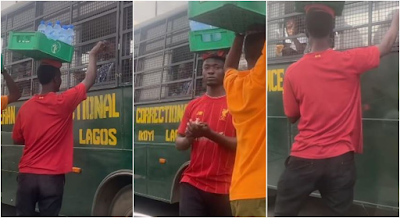 An unidentified traffic hawker has won the heart of millions of Nigeria after sharing 70% of his cash to inmates in the Ikoyi correctional service bus along Ajah in Lago State.

The video was shared by celebrity and lifestyle photographer Ojo Emmanuel stating he had never seen such an act of love and generosity.

Ojo Emmanuel added that with the kind gesture of the hawker, it is safe to say one does not necessarily need to have in abundance before they can give to others.

According to Ojo Emmanuel, efforts are being made to reach him, and he would share his details online, adding that she would wish to raise two hundred and fifty thousand for him.

The post reads: Just a few minutes at Ajah waiting for the traffic light , bottle water seller shares at least 70% of the cash on him to the immates in this Nigerian correctional service bus , i have never been this impressed by such act of love and Generosity, immediately I took his phone no just so i could get his account details later , which I will share here soon (called him a couple of times he is yet to pick up .

After what i saw today ,it’s safe to say # You don’t need to have much to Give #. Update : we want to raise a sum of 250k or more for the bottle water seller for this gesture. Still waiting for him to return my calls, once he does i will post his account details up here

The video sparked online reactions, as many Nigerians prayed for him, affirming that one does not need to have much before giving out to others.

ce_cee_ wrote: You mustn’t be rich before you have the heart to give

nana_official___ wrote: You must not have much to be a giver God bless him

pjuwah wrote: From the depth of my heart, may God Almighty Bless him abundantly!

prankhottie wrote: He’s time to shine. May he’s destiny helpers bless him real good. No be who get money dey give

at January 13, 2022
Email ThisBlogThis!Share to TwitterShare to FacebookShare to Pinterest