Why Are You Casting Me? Actress Iyabo Ojo Berates Her Colleague Nkechi Blessing 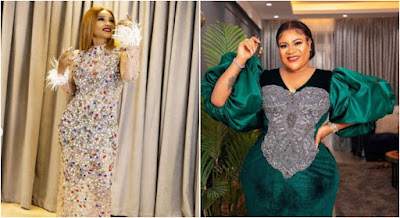 Taking to her Instagram page, Nkechi Blessing revealed that she has always received favour from women in her entire life.

However, Iyabo Ojo is very special to her as she frequently assists her and warns her not to mention it to the public.

Nkechi Blessing noted that Iyabo Ojo is different from some of her colleagues who help people publicly for the sake of Instagram but would not be there behind closed doors.

Nkechi Blessing wrote: All my life,I have always received favor from Women,I mean they are always there even when I do not ask. but you see Dis Two? @ololadeabuta_gracias.

@iyaboojofespris They are very special to me they do things for me and ask me not to mention it.

If I hear. In a world full of Oju Aiye people that would rather help you openly for the Gram and not be there behind close doors when you actually need them*This two women are different. Thank you soo much. my God will never forsake you two.

Reacting to the post, Iyabo Ojo expressed love for Nkechi Blessing and berates her for exposing her to the public even after her wanings.

iyaboojofespris wrote: love you dear, but why you dey cast me now.

Esabod Global News recalls Nkechi Blessing recently revealed the kind of gift she would want for her 32nd birthday.

Nkechi Blessing, who took to her Instagram page a few days ago to flaunt her newly built house, has begged her fans and colleague for a car gift.

Taking to her Instagram page to share photos of her house and the stamping level done on the compound, Nkechi Blessing noted that it’s pretty expensive.

Nkechi Blessing added that her birthday is almost here, and she would need a car gift from her fans.

She captioned the post: Compound stamping almost done this one cost d*e Abeg where are my fans? Feb 14th is almost here I need a Car gift biko