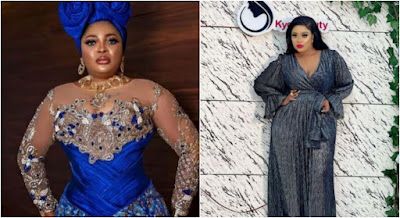 Nollywood actress Biodun Okeowo popularly known as Omobrorty has taken to her social media to pray for her colleague Kemi Afolabi after surviving a terrible traffic robbery.

Esabod Global News earlier reported that Kemi Afolabi was attacked by underworld men while returning from a movie set at Arepo.

Taking to her Instagram page to express concern for her colleague, Biodun Okeowo prayed that Kemi Afolabi would continue to win every storm and trial that comes her way.

Omoborty added that Kemi Afolabi is a survivor in all ramifications and will remain toothless with grey hairs on her head.

She wrote: Thank God for your life Oluwakemi… you will continue to win every storm and trial that comes your way. You’re a survivor in all ramifications and a survivor you shall remain till you’re toothless with your head full of grey hairs Amen. @kemiafolabiadesipe.

Esabod Global  News recalls Kemi Afolabi cried out about being in a state of shock and traumatized after armed robbers attacked her at Arepo.

This is coming a few days after the actress revealed how she battled an incurable disease that made her sell her properties and prepare for death.

Taking to her Instagram page, Kemi Afolabi noted that she experienced high poor insecurity, which has become a norm in Nigeria.

Narrating the incident, Kemi Afolabi said the armed robbers attacked her and her driver while returning from a movie set while in traffic.

Kemi Afolabi added that they left her whole body with wounds and skin in pain because of the impact of shattered glass and the use of cutlass on her body.