‘You Have Money And Fame, What Else Do You Want’ Fans Tackle Tiwa Savage As She Laments Why Dangote Is Not Her Father 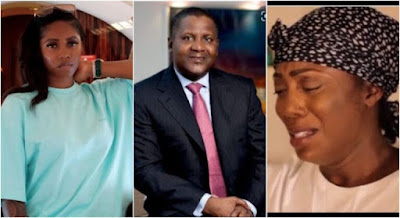 Nigerian sensational singer Tiwa Savage has sparked mixed reactions from her fans after lamenting why Nigerian business mogul Dangote is not her father.

Tiwa Savage took to her Instagram story to share a photo of herself in bed stating she had one more meeting to attend.

According to Tiwa Savage, looking for money is not an easy task. So, while requesting God’s help, Tiwa Savage questioned why her father was not Dangote or someone like Dangote.

She wrote: I have one more meeting.. It’s not easy looking for money o. God help me, but why my papa no be Dangote or something like that (may his soul rest in peace though)

Reacting to the post, some netizens advised her to write a letter of adoption to Dangote while others urged her to be grateful for her money.

omomuda1431 wrote: Write adoption letter to him, tell him to adopt you biko.

gbo_temii wrote: Even Tiwa dey complain , God Abeg help me to be better than Dangote Abeg

josephorukpe wrote: Just be grateful, you have money and you’re famous what else did you want.

Esabod Global News recalls that Tiwa Savage was listed as Google’s number one musician in Nigeria following the release of her sex video, late 2020.

The music star had earlier said during an interview that someone was blackmailing her with the sex video but she was not going to pay anybody for doing something natural. The 10-second was eventually released and it is living rent-free in thousands on mobile phones around the world.

Tiwa also made the news for her clash with Seyi Shay and for the release of the EP Water & Garri and the song ‘Somebody’s Son’ featuring American R&B star Brandy.

at January 14, 2022
Email ThisBlogThis!Share to TwitterShare to FacebookShare to Pinterest