‘Your Hand Is Already Bent, Slow Down With Your Editing’ Fans Mock Actress Eniola Badmus 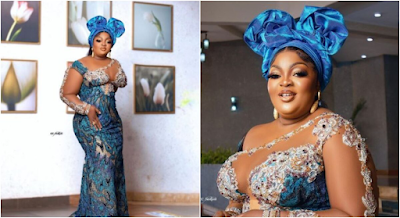 Some netizens have mocked Nollywood actress Eniola Badmus for over-editing her photos to make her body look slimmer.

Eniola Badmus has been sharing photos of her new body after her alleged gastric surgery for some months now.

However, Eniola Badmus is still not satisfied with his new body, and netizens have mocked her for constantly editing her photos to look slimmer.

Eniola Badmus got more than she bargained after taking to her Instagram page to share photos of herself from a recent event.

Fans spotted how some parts of her body did not align with each other because of too much editing.

sammyolaghore wrote: Ok girl this editing has to stop . Yea you losing the weight but not as extravagant as your editing. Enjoy the process Lol.

Esabod Global News recalls Funke Akindele shared a cryptic post on her Instagram story, which generated online reactions with many netizens speculating the shade is for Eniola Badmus.

According to Funke Akindele in the post, people should always ensure that they come first in everything because there are many users outside masquerading as loved ones.

She wrote: Ensure you come first always. There are lots of users out there masquerading as loved ones. Beware!!!.

It is no longer news that the absence of Funke Akindele at the 20 years on-stage of her colleague and best friend Eniola Badmus generated many controversies online.

Hence, some people claimed Eniola Badmus was uncomfortable with Funke Akindele’s absence and the main reason they are no longer goofing around each other’s comment section.

R
at January 09, 2022
Email ThisBlogThis!Share to TwitterShare to FacebookShare to Pinterest