‘You’re Missing If Your Woman Is Not From Ekiti-Kwara, ’ Actor Damola Olatunji Brags About His Wife 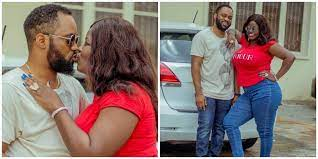 Nollywood actor Damola Olatunji has bragged about his wife Oluwabukola Arugba as she prepares a special meal for him.

Taking to his Instagram page, Damole Olatunji, whose marriage was threatened by alleged infidelity a few months ago, shared a video of his wife preparing pounded yam for him.

According to Damola Olatunji, anyone whose wife is not from Ekiti-Kwara, Eruku in particular, is missing a lot, describing his wife as stubborn but loving.

He wrote: If your woman is not from Èkìtì-kwara, Eruku in particular you are missing. OKUN OOO. stubbornbutloving.

Instagram blogger Gistlovers disclosed this, and this is not the first time Demola Olatunji is being called out for sex for a roles scandal.

It was alleged that Demola’s sex for roles scandal is not new to his wife, and they are currently having issues in their marriage, and some family members had also interfered.

The report added that Demola Olatunji’s wife has decided to come out of her shell and associate more with people to avoid being mocked. 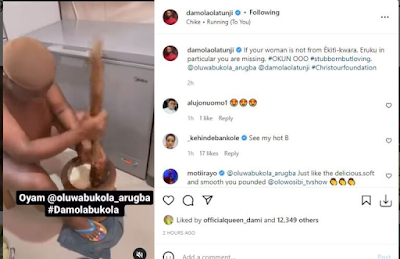