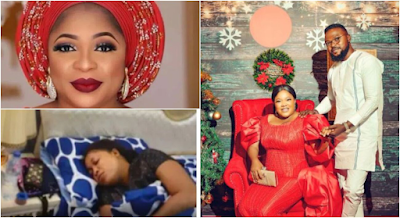 Nollywood actor Kemi Afolabi has expressed appreciation to her colleague Toyin Abraham and her husband Kolawole Ajeyemi for showing concern during her ailing period.

In a post shared on Instagram, Kemi Afolabi prayed for Toyin Abraham and her husband, saying they would never experience sorrow in their life.

Kemi Afolabi revealed that Toyin Abraham has been showing concern for a long time but told her never to mention it to the public.

While appreciating her, Kemi Afolabi urged her fans and followers to say a word of prayer to Toyin Abraham’s family on her behalf.

@toyin_abraham @kolawoleajeyemi thanks for the huge support fam may you and yours never experience sorrow in your life time you’ve been showing concerns about me long time ago. Love you.

Oluwatoyinnnnnn (and you say u no want noise) allow me to appreciate you pls. THANK YOU. God bless you. Pls say a word of prayer to the Ajeyemi’s on my behalf lovers

Esabod Global News recalls Kemi Afolabi, who battled with an undisclosed ailment in the earlier part of 2021, said she wrote her will and booked a space for her funeral, but God showed His faithfulness in her life.

According to Kemi Afolabi, she underwent a Covid-19 test every 48 hours over short of breath, was on oxygen for a month; still, there was no diagnosis.

Kemi Afolabi added that she sold all her properties after spending all her savings because she knew that bringing her condition to the public eye or begging for funds would kill her faster.

Also, Kemi Afolabi a few days ago disclosed her battle with some armed robbers that attacked her and her driver while returning from a movie set while in traffic.