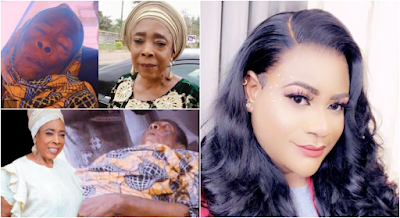 According to Nkechi Blessing, most of her colleagues rushed to post photos of Iyabo Oko with the caption ‘RIP’; she is sure that they did not do the same by paying money into her count.

Nkechi Blessing added that this is 2022, and the Yoruba industry needs to prioritise caring for aged veteran actors.

She wrote: People are so quick to post RIP but to post success, they won’t fake love everywhere. The way you all rushed to post that RIP ehn.

I am sure Most of you did not rush to her Aid when her acct was posted🥲 its 2022 the Yoruba industry needs to do better than this…Just saying respectfully.

The veteran actress, Iyabo Oko who had been bedridden for close to five years passed on Wednesday, January 5 only to return back to life about three hours later in the wee hours of today, Thursday, January 6, 2022.

Iyabo Oko reportedly moved her hand after been confirmed dead 3hrs ago.

The daughter of the 61-year-old actress, Olamide, who had initially confirmed the death news, broke the news of her resurrection moments ago.

“Good morning everyone, Iyabo oko is still alive oo, my mum is still alive o. I was the one that announced and posted that she died after my brother called me to say doctors confirmed her death yesterday but she came back to life after three hours, i have been crying, thank God she is back to us. We thank God ooo” Olamide disclosed.