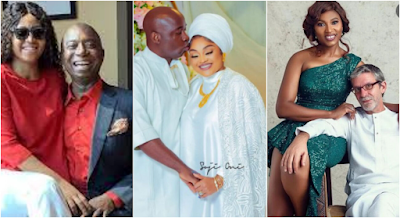 In recent times, Nollywood has been besieged with tales of actresses ‘falling in love’ with older men. From Regina Daniels to Mercy Aigbe to Ufuoma Mc Dermott and others who are dating older men discreetly, these women believe age is not a number.

Esabod Global News recalls that actress Omalicah Elom in an interview with The Sun had opened up on why she loves older men.

“I like older guys; three to five years older than me. I like my man being in charge and in control. I can’t be submissive to a younger lover; I’m too strong-headed. So, I like a man that will sometimes say ‘no’ to my bad habits and excess spending.Dating a younger lover would make it seem like a small child caressing my breasts”.

In the same vein actress and blogger, Cynthia Shalom once stated why she is drawn to older men.

“Dating or marrying an older man is an individual preference. What you like won’t be what I like. What is important in a relationship is love and understanding. Are you guys good with each other? Do you bring yourself peace? If all these are positive, then age is just a number. I don’t have age limit in relationship. What I look out for is a connection.

If my connection with you is fine, then we are good to go. When I mean connection it has to be everything; we have to connect physically, intellectually, sexually very important. So, once I have those three, I’m good. I also prefer older man because he’s got more experience than I do. Currently he’s like 17 years older than I am and it’s beautiful. He doesn’t look his age even has 6 packs (laughs).  The connection is awesome and I have also learned from them. I can’t have any challenges in any sphere of life and there’s nobody that can actually take to you about. I don’t see anything wrong with people dating younger guys.”

One of the reasons these actresses are drawn to older man is the daddy issues syndrome.

Women with daddy issues usually get easily attracted to older men. They want the next male figure to be someone who is the reverse of their father. Someone who understands her like her father didn’t.

Secondly, they find these men alluring because they believe they know all the right words to say when they feel pulled down. Older men make them feel emotionally secure.

Also, older men handle hostile situations better, they do not jump to conclusions, are calm and reasonable. A younger woman finds an older man a reassuring presence in her life.

They also believe older men are more understanding. They don’t pick quarrel over small issues and make a big deal about it.

Asked why she got married to Ned Nwoko, Regina Daniels said: “The only thing I was worried about when he proposed was how I was going to tell my family and not what the public will say or think. I have learned a lot from him. I call him ‘baby’. I used to cook but my husband has stopped me from entering the kitchen because we have cooks and domestic staff.”