‘What Anyone Thinks Of Me Is Totally Baseless, I Can’t Be Bothered’ Actress Dayo Amusa Blows Hot 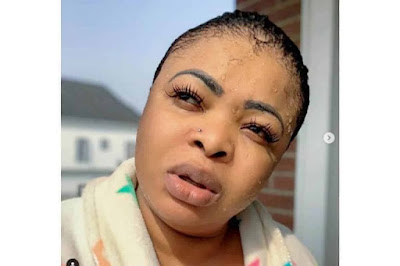 Nollywood actress Dayo Amusa read the riot act to critics in a new social media post on her page.

Dayo Amusa opines that whatever people think about her is totally baseless, and she is unbothered about it.

According to Dayo Amusa, she lives by her dreams and rules, and anyone who can not live with her decision can stay away because they don’t need to feature in her story.

In her words: At this point, what anyone thinks of me is totally baseless. I mean, I just can’t be bothered. I live by my dreams and by my rules. If you can’t live with it, it is not compulsory you feature in my story.

Dayo Amusa, who seemed fed up with the constant question in a post shared on Instagram, gave a blunt response to her critics.

According to Dayo Amusa, if people cannot answer why they are not dead yet, they should stop asking why she is still single.

She wrote: If you can not answer why you are not dead yet! Stop asking me why am still single. You know yourselves. 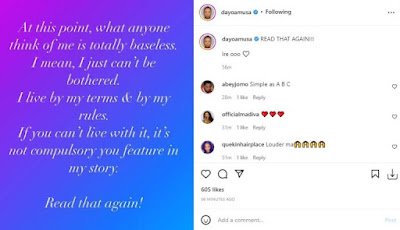