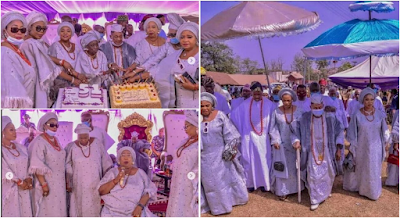 Some Nigerians have offered a piece of advice to the Alaafin of Oyo, Oba Lamidi Adeyemi, following the absence of his younger wives during his 51st coronation anniversary.

The Alaafin of Oyo, over the weekend, celebrated 51 years on the throne, and it was a massive celebration as many people, other monarchs, and dignitaries gathered to celebrate with Oba Adeyemi.

In the photos shared on the monarch’s Instagram page, many of the older queens were seen in their traditional attires and moment when they joined the Alaafin to cut the anniversary cake.

However, many people noticed the absence of his younger wives who failed to grace the occasion or celebrate him on their Instagram page.

Many younger wives of the Alaafin of Oyo had exited the palace over alleged infidelity and maltreatment within one year.

Following their absence at the special event, some Nigerians called the Alaafin of Oyo to stick with his older wives as the younger wives are merely using him for fame.

precious.amengialue wrote: Wait where are all the young wives abi na me nor de see well

prettylisa_007 wrote: When he was coronated, some of his wives were not even born.

9ja_3some__xx wrote: Baba should leave out the younger women , just stick with the older wives

thatscorpiogurl wrote: These are his real real wives … those younger ones just Dey do as them like .

The photo shared on his official Instagram page captures the 83 years old Alaafin of Oyo in a white outfit and posing for the camera while raising one of his legs.

Captioning the post, the Alaafin of Oyo said it’d been 51st years of meritorious service to humanity in Oyo town, west Africa and the world.